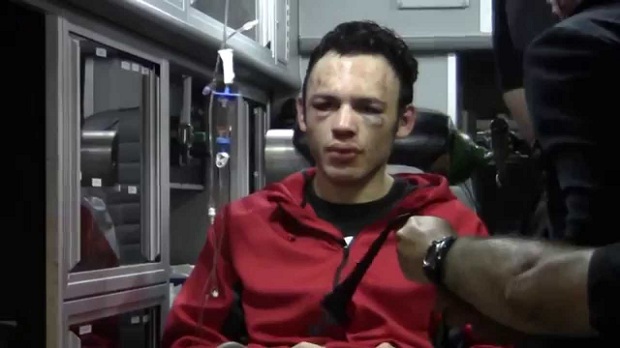 It may seem as though Julio Cesar Chavez Jr. was born a made man, but back in 2008, when fans in Hermosillo, Sonora pelted the ring with garbage and cups of beer in protest of his controversial split decision win over Minnesota’s Matt Vanda, he certainly didn’t seem to be living a charmed in-ring life.

Jr. sat in his corner, dejected and deflated, protected from the debris with towels by his corner men while his father battled with angry fans at ringside. On that night he gave a heartfelt post-fight interview in the beer-soaked ring about not ever wanting to fight again.

— Chavez Jr. and the Arrogance of Ignorance

Despite all the criticism I’ve heaped on the broad shoulders of El Hijo del Leyenda over the years, it still makes me bristle when I hear people talk about him as if he were some utterly inept buffoon.

Julio Cesar Chavez Jr. could succeed when he set his mind to it and showed flashes of being a viable product with real fighter instincts at various times in his career.

The thing is– How do you get somebody to fight when they really don’t need to?

Julio Jr. was cut from a very different cloth than most fighters.

Raised as near-royalty in his home state of Sinaloa, he wanted for nothing and suffered only rich boy  longings for an absent daddy. When it came time for Jr. to earn a living, there was little doubt that it would be in boxing, at least in some capacity. He had, literally, been prepared for nothing else.

But Dad doubted the toughness of his eldest right from childhood and sought to cure his introspective son’s “weakness” with several undercard boxing exhibitions staged for the amusement of his hangers on.

Jr. showed aptitude and basked in the attention of his now-doting dad. The rest is a well-documented history that may have ended last Saturday night when Andrzej Fonfara dropped the shockingly flat and listless second generation star, compelling him to quit on his stool between rounds nine and ten.

But Julio Jr. was never really a fighter. And when he got old enough and brave enough to pull himself out from under his father’s angry-proud glare, he lost the only bit of motivation that had kept him in check.

But how do you blame someone for not being what they never were?

Normal, financially secure kids don’t grow up to be warriors. They have too much to lose. They simply never have to invest all of their heart and soul into any endeavor, much less the dangerous art of combat. Warriors are forged from a childhood of living in an abandoned railroad boxcar with nine brothers and sisters..like Julio Sr.

“Juliocito” was never able to give the sport his all for the very same reason that the bloggers and his dedicated critics could also never thrive in the real world of boxing. He had options in life. He didn’t have to fight.