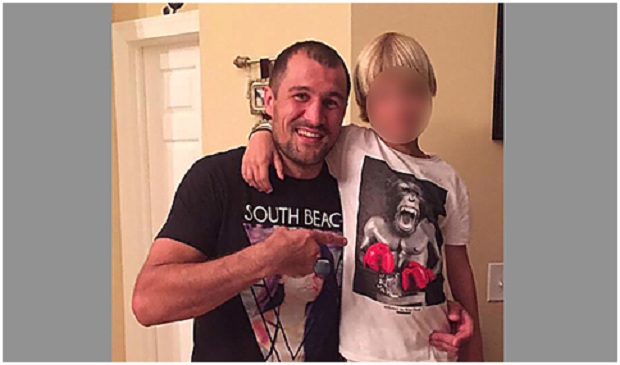 “Sergey is not a racist. He is the nicest person. He is not a racist person, and I don’t want to talk about it anymore, and you can put that in the paper.”—Egis Klimas—before the current controversy

“What he did was idiotic. It was a major lack of judgment. But you will discover to what extent Sergey Kovalev is petty and narrow-minded. I’m not sure people are going to find him likeable for very long. — Stevenson’s promoter, Yvon Michel,

The furor created when the Russian boxer pointed to a T-shirt worn by a child, displaying a Chimpanzee in boxing gloves, above the caption “Adonis Looks Great” was criticized over social media and on a number of boxing sites. Many called the boxer known as the Krusher “naïve,” but others said he was a racist point out that this was not his first such issue. The Tweet was swiftly deleted, but the damage was done as the Krusher crossed the line.

At any rate, whether ordered to by his management team or because he has “seen the light,” the WBO, WBA and IBF champion issued the following apology;

“I apologise for my tweet about Adonis Stevenson. I really did not know it was bad. In the last few days my friends at Main Events teach me some history about the United States. It is very different to where I grew up in Chelyabinsk. I’m still learning here and I understand I have made a mistake. I hope I can be forgiven this mistake and I will not do such a thing again.”