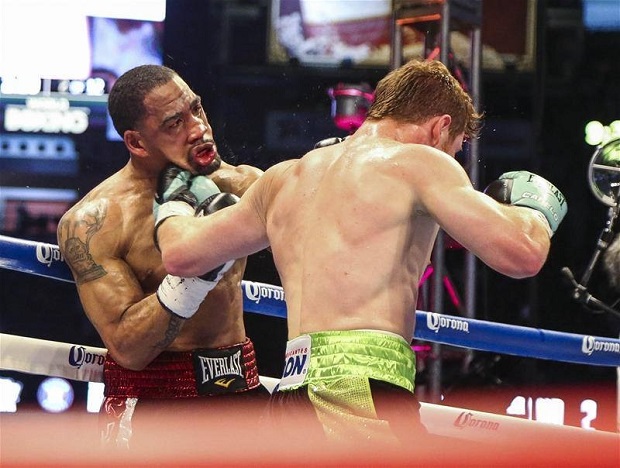 Hola familia, amigos y enemigos. Welcome to a cilantro, lime and guajillo chili pepper flavored edition of Central America’s highest rated, most hard-hitting investigative pugilistic paper this side of the Panama Canal, The Sunday Brunch – We are to run-on sentences what Manny Pacquiao is to impromptu shoulder surgeries. This week we’re touching on Canelo’s rousing decapitation of James Kirkland and we are going to wonder aloud if he and Miguel Cotto or Gennady Golovkin will ever share a ring together. We’ll also have some (possibly bogus) emails to round out the action, so hold on to your tamales and Google the word “chingon”, we’re about to sort through this nonsense. With that being said, I gave you your instructions in the dressing room; what I say you must obey – Cuidate, escucha mi, toca los manos y buena suerte…Let’s get it on!

James Kirkland had a lot of potential when he was under the watchful eye of his former trainer and former four division world champion, Ann Wolfe. Kirkland’s reoccurring run-ins with the criminal justice system kept his career from ever evolving past rugged slugger with sub-par defense, though.

Back in 2011, James Kirkland broke from Ann Wolfe’s incredibly impactful tutelage and overlooked Japan’s Nobuhiro Ishida, who was a 17.5-1 underdog, and was dropped three times and subsequently halted in the very first round.

Perhaps in an effort to regain his reputation, Kirkland fought three more times in the 2011 calendar year – all three wins were stoppage victories, including an incredible clash with Mexico’s Alfredo Angulo.

In fact, James Kirkland’s ability to overcome a big knockdown in the first 30 seconds of his fight with Angulo was largely attributed to his superior conditioning courtesy of Ann Wolfe, who he had rejoined prior to the bout with the Mexican banger.

Unfortunately for Kirkland, personal issues and problems with the law kept him away from the squared circle for quite some time – He fought only once in 2012, once in 2013 and then this past Saturday where he was again without Ann Wolfe in his corner and was once again violently separated from consciousness, early.

As for Canelo Alvarez, he showed us again that when he has a largely stationary target in front of him, he can beat it to a pulp using his impressive power generation, shot selection and serviceable boxing skills.

However, when faced with boxers with better than average lateral movement and counter punching ability, Canelo’s attack output and accuracy suffers a drop off in effectiveness – as illustrated in his competitive fight with Erislandy Lara and punctuated in his loss against Floyd Mayweather. Canelo does have loads of talent and a tremendous amount of upside, though. His career trajectory is likely taking him to the Hall Of Fame one day in the future.

So what’s next for Mexico’s most popular jengibre? If he can secure a fight with Miguel Cotto, it would be huge for boxing as nationalistic rivalries with the two countries and cultures involved would generate a lot of interest. In my opinion, this fight would be relatively easy for the young former champion. A match against the Kazakhstani Kremator, Gennady Golovkin would be a gift for boxing fans, but this isn’t a fight I see favoring Canelo Alvarez. GGG’s more sophisticated boxing ability and heavy hands would likely spell disaster for the Mexican at this point in time.

Thanks for writing again, Ran. The secret to good guacamole is first and foremost, good avocados, you can use any kind you like, but I suggest Hass avocados – and pick ones that are uniform in color and slightly give to gentle pressure from your fingertips.

Take four ripe avocados and cut open, remove seeds and using a spoon, extract the meat into a bowl. Add one diced tomato with the seeds removed, one finely diced white onion, the juice of three limes and one lemon, one bunch of fresh cilantro and 13 squirts of Frank’s hot sauce – combine and mash until emulsified. Sea salt and freshly ground black pepper to taste, adjust acidity if needed.

What did you think about the scoring of the Mayweather-Pacquiao fight and what do you make of Manny’s injury? – Michael Kunts

First let me say that 118-110 is a fine score if you ask me. I saw four punches for Manny Pacquiao that landed cleanly and did damage. Other than that, he was outscored and out-landed for nearly all of the fight. At no point in the many times I’ve re-watched this bout did I see his corner working on, or icing his shoulder. In fact, he raised both of his hands up in the air right after the match and failed to bring it up in his post-fight interview with Max Kellerman, only stating that he thought he won the fight. In short, I think the injury is bullshit.

If Manny Pacquiao didn’t “re-injure” his shoulder until during his fight with Floyd Mayweather, why did he request an injection of Toradol right before the match? What is Toradol, anyway? – Malex Mariza

Thanks for taking the time to write in to us, Malex. Now, I’m no expert on the subject, but I happen to know someone who knows more about it than I. Here you will find out that this anti-inflammatory drug can be (and is) used illicitly by athletes for some time now…“It’s the sporting world’s worst kept secret that Toradol has been widely used as somewhat of a legalized cheat or substitute “pep pill” for otherwise healthy players looking to be temporarily rejuvenated for the game. In a legitimately injured athlete, Toradol completely masks the effects of that injury, allowing the player to perform as if nothing were wrong. In an athlete not suffering from a debilitating injury, however, it turns him into what could be described as a virtually indestructible force.”.

Thanks for joining us again, we’ll be back next week with some more dangling participles, run-on sentences and obscure, nonsensical jokes. We will have tips, tricks and codes for the Sega Dreamcast and we’ll be interviewing Mike Tyson’s step brother’s little sister’s friend of a friend. Send all penis enlargement scams to JESSEBOXINGTRIBUNE@GMAIL.COM or unfollow us on Twitter @JESSEBOXING, stalk our cat pictures on Facebook at Jesse Ian Lardies. Until next time, sante!