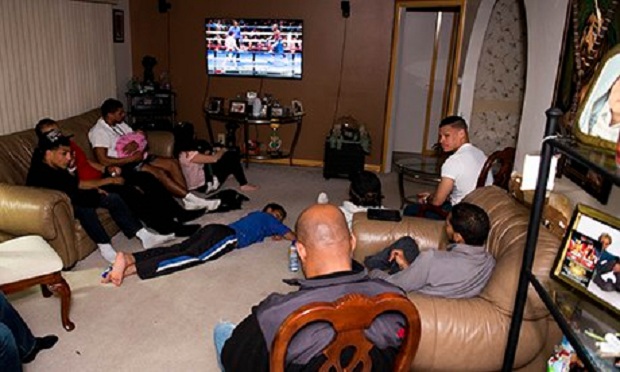 Back in the early Seventies, Playboy magazine, looking to fill the space between the naked pictures, sold itself to advertisers with a campaign called “What Sort of Man Reads Playboy?” A Don Draper-looking fellow was pictured jet-setting, buying cars, and generally making the best use of his “over $10,000 household income” (those were the days, huh?) on luxury products, the implication being that luxury brands should buy space in the magazine.

But deep down inside, Playboy was really about young boys going through early adolescence with no goddamn idea what an actual woman looks like, thanks to heavy airbrushing, the sort of young and brutish impulses that appealed to the base, animal instincts of man.

Sounds an awful lot like boxing, doesn’t it? If you’re a person of refinement, you watched Floyd Mayweather dismantle Manny Pacquiao using the sweetest elements of the sweet science, the luxury brand of smooth performance for the discerning fight fan who loves a defensive masterpiece and the systematic breaking down of an opponent to render him ineffective and impotent in the ring.

If you’re a brute, you watched Gennady Golovkin beat the shit out of Willie Monroe Jr. with about as much subtlety as a young woman landing a man by just letting the sweater puppies loose and packaging them with a coy, cute smile. There was no art in that fight. It was simply one man ripping the heart out of another man, and he’d have done it literally if the recipe called for it, like one of those “FINISH HIM” moments in Mortal Kombat.

Guess which fight was better-received by the audience. Spoiler alert: It’s the same audience that watched Saul Alvarez slaughter James Kirkland a week after the Mayweather fight and thanked the gods that “the sport redeemed itself.”

Kinda tells you “what sort of man watches boxing,” doesn’t it?

Certain elements of the boxing public are driven crazy by this race-to-the-bottom attitude about boxing, blaming it on everything from MMA turning casual fight fans into people too stupid to enjoy the nuances of the sweet science, to the amateur system helping to ensure that no American fighter ever learns how to fight (Golovkin is, after all, from Kazakhstan, which has elements of the old Soviet system still very much ingrained in its boxing culture, and Ruslan Provodnikov is another example of how the former USSR turns out brutish-but-entertaining boxing), to the just plain base, animal instincts that make your average heterosexual man prefer tits to conversation when a pretty girl’s in the room.

The question is what boxing does with this information.

The public has proven exceptionally tolerant of mismatches, provided the fights are over “before they have a chance to drag on too long” (a complaint once leveled at the Klitschko brothers on social media because—seriously—you generally have to wait eight rounds before their lumberjack act bears fruit). That’s not to say people want to see some nobody smashed in two rounds—Golovkin openly admitted to carrying Willie Monroe and letting him hang around for a couple of extra rounds “to give the fans their money’s worth”. GGG is a savvy fellow; he knows that the hustle doesn’t work once the marks know what’s up. This is something that, say, Deontay Wilder never learned, which is why he’s so widely mocked for taking on hobos whilst simultaneously clamoring to be taken seriously as a world champion.

Al Haymon has, for the most part, figured this out, and it’s worth noting that Haymon’s biggest critics are the person-of-refinement crowd who rail against him for producing one-sided, low-risk-outcome fights for the guys in his stable whom he wants to “put over”, to steal a term from pro wrestling.

On some level, this is ingrained into us as humans. After all, the subject of pacing has been discussed to death…and for those of you who are fans of your columnist’s What If series and who are looking forward to reading Historical Fight Night should recognize a lot of this video in the way the stories are presented:

And it’s not just some pissant blogger who’s discovered that there’s a certain “ideal fight” the public wants to watch that keeps showing up in fiction. After all, your columnist did not invent fictional boxing matches. Some Italian guy figured this out almost 40 years ago.

Seriously. 40 years. Rocky came out in 1976, and next year, the anniversary think pieces will be the boxing media’s Christmas gift to you the reader.

Mayweather-Pacquiao was not anywhere near that pacing curve. The initial burst of excitement in the first four rounds, as Manny tried briefly to take the fight to Floyd, gave it that potential, but once Mayweather took over and imposed himself on the fight, it was all downhill from there.

The most perfect example in boxing history of perfect pacing? The first fight between Diego Corrales and Jose Luis Castillo. That fight came out of the gate with a furious beginning, setting a baseline that the fight followed throughout the ten rounds it went on.

And that tenth round? Corrales, battered and looking beaten, mounting the single greatest rally in the entire history of the sport to steal victory from the jaws of defeat? That final flurry was nothing short of Luke Skywalker landing the killshot on the goddamn Death Star. All that remained was the denouement, handled by the post-fight interviews. Of course the crowd went bananas.

So what sort of man watches boxing? I don’t think it’s as bad as GGG’s critics seem to want to claim, that all men are after is bloodlust—Golovkin himself tried to artificially and unilaterally impose better pacing on his own fight. I don’t think it’s as bad as the purists claiming that people don’t know a good technical fight when they see it, because Mayweather-Pacquiao was boring to watch even for the kinds of folks who make a living writing about the sport and know an uppercut from a rabbit punch.

Boxing is an art and a sweet science. Your average fight fan still understands this. It’s too bad the powers who make the matches don’t.

Fox Doucette covers boxing news and trends for Boxing Tribune News and writes the What If and Historical Fight Night alt-history series for The Boxing Tribune. Saving the reveal of that Extra Credits video for the beginning of the buildup to the climax? Pacing, folks. Pacing. Fan mail, hate mail, and suggestions for future think pieces can be sent to beatcap@gmail.com.