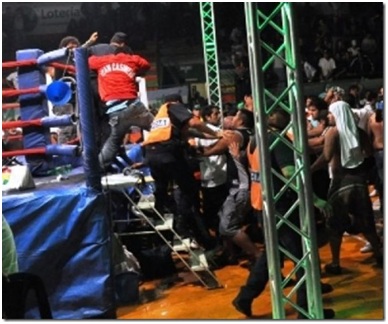 “Lazarte v Casimero {was} for the IBF Junior Flyweight title in Buenos Aires on the 10/02/2012. A fight that had everything: weak refereeing, biting, rabbit punches, low blows, phantom knockdowns, and a nasty riot at the end. No boxer in his right mind would want to fight in Argentina now”—Poster named Gyalist.

“Lazarte, tried to bully his way through Casimero’s defense from the start. He bit the Filipino’s shoulder twice, butted, elbowed, threw rabbit punches and held his head down while belting out sucker blows. A point was deducted from Lazarte’s scorecard in the sixth for repeated butting”– Joaquin Henson

This was an especially mean-spirited affair that also included riot, mayhem and havoc. Of course, when a boxer’s record is 50-11-2 and four of his losses have come by way of disqualification, one has to wonder about his ring disposition and demeanor– even if that boxer had won and defended successfully the IBF World lightweight title and a bunch of regional crowns. Luis Alberto Lazarte, alias “El Mosquito” was well known for his dirty tricks having been disqualified in two previous attempts to win a world title in 2002 and 2007.. He ran off a 17-fight win-streak between 2004 and 2007 that ended with a DQ loss to Edgar Sosa in Mexico. However, he was also known for something else—something darker

What firmly installed “El Mosquito” into the pages of boxing lore was his infamous encounter against the now-streaking and very talented Filipino John Riel Casimero, alias “Quadro Alas,” at the Mar del Plata in Argentina in 2012. The fight was for the vacant IBF 108-pound title. Before and throughout the fight, strange and ominous loud pounding noises could be heard coming from the crowd, perhaps a precursor to what was to come. And what was to come left an indelible stain on Argentinian boxing.

Casimero was deducted questionable points in each of rounds four and eight by heavily sweating New York referee Eddied Claudio. He was decked in the fifth round and was also warned for low blows and pushing. For his part, Lazarte was deducted a point in round six. And then he was floored twice in the ninth and once in the tenth at which point– at the 1.09 mark– the fight was stopped since Lazarte was defenceless and on his way to Rag Doll status. The Filipino was declared the winner by TKO as the end came suddenly and decisively.

Then all Hell broke loose. The Filipino made the mistake of gloating and the Mosquito didn’t help matters by blaming Alas for hitting him on the back of the head. At any rate, the liquored-up pro Lazarte crowd went bonkers and threw drinks, empty bottles, scores of chairs, chains, and other debris into the ring hitting Casimero and his cornermen.

Meanwhile, Referee Claudio and Judges Eugene Grant, the late Richard Green, and Don Trella ran for cover along with everyone else. One moron from Lazarte corner assumed a fighter’s pose and went after Casimero and anyone else in his sights. Security guards were able to hide Casimero under the ring for 30 minutes while rioting fans were finally led out of the arena. Amazingly Casimero and his team escaped with only minor injuries. Here is the full and ugly fight: https://www.youtube.com/watch?v=9bTLzMFhdT4

Later IBF President Daryl Peoples wrote to Osvaldo Bisbal, the president of the Argentina Boxing Federation, to inform him of the decision as follows:
“There is one measure that we are taking into our own hands and that we will enforce,…As a result of Luis Lazarte threatening the life of referee Eddie Claudio while receiving a points deduction in the sixth round, Lazarte is banned from being involved in any capacity in any IBF-related fight that takes place in Argentina or around the world.

“I believe that I do not have to express to you that Lazarte’s threat to Claudio, which can be clearly heard in the telecast, is completely unacceptable, should not be taken lightly and merits punishment. Behavior of this nature by a fighter is not and will not be tolerated by the IBF.”

According to IBF PR Director Jeanette Salazar, the Mosquito took out his mouthpiece in the sixth round and told Claudio, “Do you want to get out of here alive?”

Reportedly, Argentinian promoter Osvaldo Rivero and Lazarte himself went to Casimero’s dressing room after the fight to apologize. Argentinian TV commentators who covered the bout said the display of poor sportsmanship was an embarrassment.
B
ut lo and behold, Lazarte (now 52-11-2) is fighting again (and in Argentina) after a 29-month layoff and recently won a SD over a limited opponent.