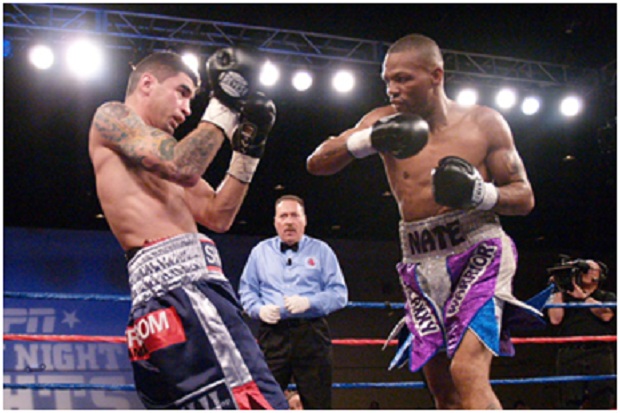 “This is the kind of night that makes it difficult to defend this sport.”—Teddy Atlas

A fit, ready, and focused Nate Campbell (29-5-1) fought tough Ricky Quiles (38-7-3) at the A La Carte Event Pavilion, Tampa, Florida, on March 2, 2007, and during the bout, the “Galaxy Warrior” did some things to Quiles that were downright frightening to witness

In the 10th round, Nate hurt Quiles with three consecutive hard rights to the head. As the punches rained down, Ricky was barely able to remain upright. Nate then went downstairs and rocked Quiles with a series of thunderous body shots that had his opponent gasping and spinning away in full retreat. Campbell continued to relentlessly unload more body shots. Ricky was wobbling across the ring with only the ropes to keep him up. At the end of that ultraviolent round, Quiles’ corner or the referee, Jorge Alonso, should have rescued him from himself.

Ricky Quiles then became more than target practice and allowing it to continue proved absolutely nothing and did no one any good. In fact, it ended the veteran’s career, as he never fought again.

In the 11h round Nate looked at the referee as if to say “what are you waiting for?” It was the same look Holmes gave to Referee Richard Green during his beating of Ali. Denis Lebedev gave it to Steve Smoger during his slaughter of Roy Jones. Jr., but was ignored as well. Given these circumstances, the decent Campbell then went to the body to minimize what damage had already been done and to avoid doing permanent damage to Ricky, but one could plainly read the disgust on Nate’s face.

As it was becoming evident in the final round that Nate Campbell had the fight in well in hand (The scores ended up being 120-107, 119-109, and 119-106 reflecting the one-sided nature of this beatdown), ESPN commentator Teddy Atlas told fellow commentator Joe Tessitore and the viewing audience that he was going to ask the ref to stop the fight. Shortly after, he could be heard on the ESPN broadcast yelling at Referee Jorge Alonso, “”REF! REF! STOP THIS FIGHT REF!” He would later apologize to the viewers saying, “Well I’m sorry if that was unprofessional, but it needed to be said.”

And it also should have been said to Ricky’s “brave” corner,