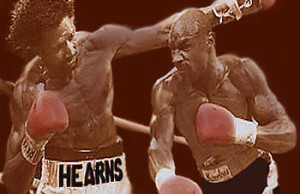 Unfortunately for the older man in each fight, 1951 Marciano fought 1951 Louis and 1991 Foreman fought 1991 Holyfield. Sure, Foreman would later feast on the weakness of the heavyweight division while Mike Tyson was in jail (seriously, imagine Iron Mike chewing through that lot—anyone not named Holyfield, he’d have beaten silly. We’ll get to this eventually.)

It is against this backdrop that the WBA’s middleweight tournament kicks off, on April 29, 1978. There exists a critical difference between, say, a 39-year-old Gratien Tonna and a 24-year-old Marvin Hagler. Meanwhile, David Love had knocked out Willie Monroe, the last man to beat Hagler, in 1976, but Love’s career was a bit like the US economy the day before Lehman Brothers collapsed. Everything looked great for him after his KO of Edgar Wallace…but we begin with:

(The participants were seeded according to an Elo-style system at the end of 1977, the same system used by Boxrec in 2015.)

Antuofermo had as the feather in his cap a win over Emile Griffith in 1974, and had just beaten the man ahead of him in the seeding, Bennie Briscoe, two months before. He was a fighter on the rise, cracking the top eight in the back door by smashing through four relatively weak opponents in 1976 and ’77 after moving up to middleweight thanks to being unable to make weight at 154. The guys he fought may have been nobodies, but the decisive knockouts proved that the Italian’s power was easier to bring to bear when he wasn’t starched from trying to dry himself out for a junior middleweight fight.

Valdez? His career had become a case of waiting for Carlos Monzon to retire, because the Argentine had been his nemesis and the biggest obstacle to a sustained title run. Indeed, when Valdez had beaten Briscoe in November, many in the press essentially crowned him the interim champion before anyone in a sanctioning body would ever dream up such a thing. Everyone knew Monzon would retire, and there were calls for the WBA to strip Monzon so Valdez-Briscoe could be for the title.

Where the trouble comes in here for Valdez is that the 15-round war against Bennie Briscoe had left him a much weaker fighter than he had been during his occasional flirtations with glory and brief title runs atop the departed WBC earlier in the 1970s. Antuofermo was 25; Valdez was 32, and an old 32, with a 61-6-2 record. Hugo Pastor Corro, who had been denied a fight with Valdez by virtue of having been left out of the tournament, watched on television, convinced he could knock out the old Colombian.

As it stood, Corro had to watch Antuofermo lose the early rounds, down by a consensus four rounds to one after five, before rocking Valdez with a straight right hand in the sixth, putting Valdez on the floor, then steadily wearing out his opponent over the remaining nine rounds. Three scores, each a point either side of 145-139, sealed the unanimous decision.

Remember that bit of commentary in the setup earlier about David Love? He came into this fight 30-12, with 12 KO wins…and seven KO losses. Marvin Hagler was 38-2-1, with 31 knockout wins. The last man to beat him, Willie Monroe, had paid a dear price for stirring up that hornet’s nest, getting savagely knocked out twice in 1977 by the Marvelous one. Hagler was on a streak of twelve straight wins, all save one (an ugly fight in which Jim Henry, an 11-26-3 nobody, just tried to go the distance) by knockout.

Love thought he belonged among the middleweight contenders. Hagler, with a right hook from the southpaw stance that Love never saw coming only 72 seconds into the fight, thought otherwise and proved it. This fight was a mismatch and a slaughter masquerading as a 4-5 closely-seeded matchup, and taught people that there are better ways to seed a boxing tournament than mathematics.

A 39-year-old Tonna had just lost to Ronnie Harris to drop his record to 43-6, and it was a sign of things to come. Bennie Briscoe, meanwhile, was 35 years old and looked in peril of losing his own career, especially since a recovery fight with Tony Chiaverini had been taken off the table to make room for a fight date as part of this tournament. Briscoe’s record stood at 58-16-5, 48 by knockout, but he had lost two in a row and hadn’t won a fight against a contender-level fighter since beating a young Eddie Mustafa Muhammad back in 1975, before Muhammad grew into his strength for his run at light heavyweight.

The broad belief was that Tonna still had enough left to deal the final blow to the career of Bennie Briscoe, but there was another fundamental truth about the Frenchman that was exposed in this contest. Not only had he gotten old overnight against Harris, but the only two times he had fought for a legitimate world title, Carlos Monzon and Rodrigo Valdez had kicked his ass.

Briscoe may not have been Carlos Monzon, but he could damn sure throw a punch, and when one of his left hooks landed flush on the chin of Tonna in round five, the sharp and rapid decline of Gratien Tonna was well and truly underway; he would never again be a serious player in the middleweight division. Three fights, three victories by the lower seed…would all of the top four suffer the fate of the upset?

Ronnie Harris was the undefeated fighter in this throwdown, with a record of 28-0 and fresh off a win over Tonna only two months before. Alan Minter was one of Harris’s victims, getting sliced and diced en route to an eight-round TKO loss on cuts in July of 1977. Minter had also lost to Gratien Tonna by TKO in the last big win of Tonna’s career, and had been knocked out four times by club fighters when he was still on his way up the hobo circuit in 1973 and ’74, including a loss to a guy (Ricky Ortiz) who brought into the fight a record of 23-24-2…with four KO wins. Minter was the fifth and last stoppage win of Ortiz’s career, who lost his next two by knockout (bringing his total to 13), including to Vito Antuofermo in 1975, before retiring.

Ronnie Harris only had 11 KO wins, but one of them, previously mentioned, had just occurred barely a year before this fight. The stage was set for a fighter of lesser power but the ability to cut his opponent to face a guy who may have been on the rise, but whose weaknesses were on clear display for all to see.

It was a bloodbath. Minter practically started bleeding during the ring walk; his cut man had his work in front of him by the time the bell sounded to end round one, as three early jabs hit the scar tissue in just the wrong way and opened the cuts up afresh.

Second verse, same as the first, as Minter’s face turned into a vile, bloody mess, the kind of bleeding that surely made some of the viewing audience watching on their color television sets wonder if perhaps there was not some wisdom in watching a sport as visceral as boxing in black and white.

By the end of round five, the ringside doctor none-too-subtly suggested that the referee stop the fight before Alan Minter bled out.

You’re probably wondering whatever happened to Mike Leary and Panama Lewis after their orchestrated assassination of Muhammad Ali. Next week, you find out. Tuesday, July 7, noon Eastern, right here on The Boxing Tribune. Stay tuned.