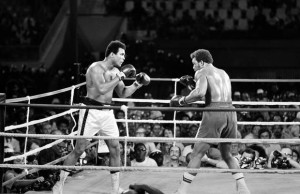 The heavyweight title sat vacant; Igor Vysotsky was safely back in the Soviet Union, and Muhammad Ali was dead. A firestorm ensued in New York City, as a combination of black nationalists, Cold War hysteria, and a little bit of leftover post-Vietnam home-grown American skepticism from veteran soldiers led to rioting.

The problem with the riots came when you give a bunch of white-power right-wing Cold War extremists and a bunch of black-power kill-whitey types weapons but take away law and order. It didn’t take long before the riots degenerated into accusations hurled in both directions—the black rioters claimed that Ali’s death was a setup; the white rioters claimed that the blacks were in league with the communists for distracting attention at what was clearly the Soviet Union’s fault and besmirching the Good Ol’ US of A.

Who shot first? Nobody kn…it was the white guys. The war veterans got organized in a hurry behind an old Marine by the name of Staff Sergeant Walpole, and the combat-hardened men of this impromptu militia turned what had been a two-headed riot into a slaughter. Fifteen men, all of them affiliated with the black nationalist faction, lay dead, and by the time the National Guard arrived, it was clear that something had gone horribly wrong. The old Marines were arrested by NYPD officers accompanied by the Guard, and they surrendered in relative peace when compared against the bloodshed that had just broken out.

What’s more, in the confusion, it was hard to gainsay SSGT Walpole’s assertion that he was defending his men and that the other side had shot first; witnesses at the scene supported the story of whichever side shared their racial makeup, turning it into a he-said he-said between whites and blacks in 1978 America in the heart of New York. The district attorney ultimately refused to prosecute.

Over the ensuing three weeks, Chicago, Los Angeles, Washington, Detroit, and New Orleans all went up in riots, and after he’d been initially exonerated, SSGT Walpole was the point man, this time operating with the full authority of the United States Marine Corps, at least in theory, and given more men to better carry out his aim. In total, there were 122 casualties, all of them part of the aggrieved faction, and to a man, all 122 of them black. America had not seen a racial crisis of this level since the Watts riots back in 1975.

Finally, on March 25, President Carter took to the airwaves to give a speech calling for peace and for America to “heal its wounds that have become raw from this tragedy”, while at the same time reminding listeners that the government could and would use every means at its disposal to maintain order. Unrest and demonstrations slowed and soon enough, by the end of April, except for the occasional raving anarchist in a park, order had indeed been restored, but the sport of boxing had combined with Cold War tensions to boil over; whatever happened next would have to be completely on the level in order to stop yet another explosion among the public.

People thought it was an April Fool’s joke. The WBA called for a title fight to fill the vacated heavyweight championship of the world, but the men involved were hardly in a position to try to be champions. George Foreman, who had retired following a loss to Jimmy Young in March of 1977, was persuaded to put his year out of the spotlight aside and fight Duane Bobick for the title.

Foreman was the hero black America needed; Bobick was the perfect white chump to act as a sacrificial lamb and point of pride. The WBA had considered Scott LeDoux (who wanted no part of Foreman again) and a 21-year-old kid from New York by the name of Gerry Cooney, and they’d even reached out to Chuck Wepner. Bobick was their fourth choice; Ken Norton had knocked him out only a year previous.

In any event, the fight was scheduled for June 3, giving both fighters a full camp and the media time to pump up the narrative. Foreman was reportedly approached by everyone from Louis Farrakhan to Harry Edwards across the black-power spectrum, renewing his sense of purpose and commitment to the sport he was ready to abandon as it became less about one man’s ego tested in the crucible of the ring and more about one man carrying the torch for his race.

Foreman made public appearances in the lead-up to the fight, his newfound Christian piety and nascent aspirations as a preacher making him well-equipped to speak in a way that was nearly as eloquent as a certain other preacher who had come along earlier in the civil rights movement.

Ironically, his frequent allusions to the theme of “keep what is ours” was an interesting commentary on the racial makeup of the heavyweight title over the preceding 15 years; as much as the calls for urban peace were overarching, the simple fact remained that nearly a decade before Mike Tyson was to make the term his own, “baddest man on the planet” was a title that was going to stay black as midnight.

The fight? A single round and a slaughter. Bobick was game but horrifically overmatched, and Foreman, the hopes of a race resting on his shoulders, fought like a man imbued with the wrath of God Himself in the pursuit of his goal. For two minutes and eight seconds, Bobick was pounded like a cheap cut of meat, finally going down from a straight right hand; he was out before he hit the canvas. The heavyweight division once again had a champion, and George Foreman’s retirement would have to wait for another day.

Meanwhile, Igor Vysotsky’s erstwhile trainer did not escape punishment; Panama Lewis was in the corner of Duane Bobick, and even though the federal commission had inspected the gloves and the wraps and everything else connected to the fight to assure the public that everything was on the level at the insistence of Congressman Jerry Ambro, whose own election had been so intimately tied to cleaning up the sport, people were still appalled that he would be allowed anywhere near another title fight so soon after the events of the last one.

It was against this backdrop that Lewis, who had gone to a restaurant in his adopted hometown of Miami for a midweek meal, found himself hustled into a car trunk, driven out to the Everglades, given a nice little .45 ACP double tap dessert, and left as gator chow. Nobody had the beginning of a clue who was responsible; Lewis had made enough enemies to make identifying one in particular all but impossible. The case went cold, as did the body of Panama Lewis.

We return to our middleweight tournament and check in on Mickey Sakai, Roberto Duran, and give a roundup of the rest of the big fights of 1978 as we prepare to wrap up that year and move forward to ’79. Stay tuned, every Tuesday, right here on The Boxing Tribune.