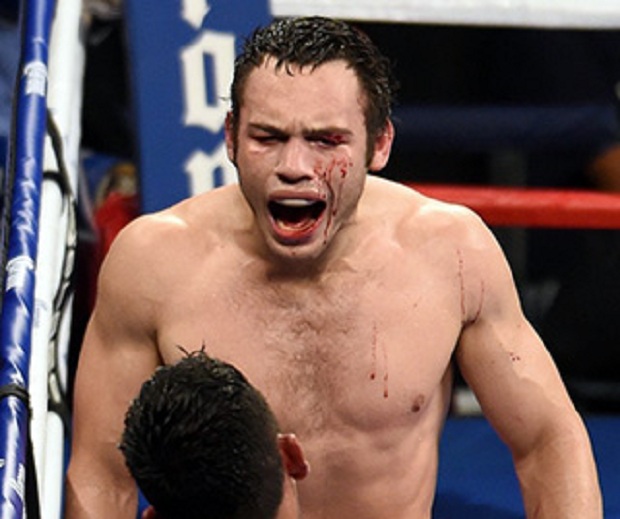 Boxing fans and media tend to ascribe a noble code of warrior conduct to fighters. It’s part of the masculine fairy tale aspect of boxing that is such an integral part to so many observers’ enjoyment of the sport.

But, in reality, fighters are just human beings with the same flaws and character quirks everyone else has.

There are bullies and heroes; faithful husbands and serial cheats; liars and honest men; hard workers and those perpetually looking for a shortcut.

Accepting that fighters are also human beings seems to somehow diminish the fairy tale in the eyes of fans and media, who maybe can’t face the fact that they are cheering the slow-bludgeoning death of two people. It’s much easier to view these men (and women) as noble warriors, playing out macho fantasies of bloody conquest. This makes it all palatable, excusable. These warriors are there to prove their mettle, to test their will, to assume the throne. With this mindset, there is little room for actual humanity. The quirks of the human psyche only serve as a buzzkill to the enjoyment of the warrior role play.

And if the “warriors” wander too far off the game board, they often meet with a violent backlash.

Dare to admit that boxing is a business or work towards better money deals and you will be called a coward. Conduct yourself outside the ring as anything other than a charity-loving prince among men and you will get ripped to shreds. Act in any way unbecoming of the cartoonish warrior code applied to you and there will be a problem.

And that takes us to Julio Cesar Chavez Jr. and the hate-hate relationship that he has with almost the entire sport of boxing.

Chavez Jr. is fairly unique when it comes to this sport. He’s a rich kid who fought, not out of necessity, but out of choice. Rather than fighting his way out of the barrio, he was exploiting a career option. Boxing was not so much a calling as it was an inheritance.

From all available info, it looks as though Junior likes very little about the sport that defined his father’s existence, other than the money it brings to him. It’s easy to understand how, even if he feels as though he’s giving it his all, he’s probably giving next to nothing when compared to other fighters.

Real, elite-level training requires almost a super human-like level of effort, a demon pushing you from behind, urging you to work your way out of whatever hole you find yourself in.

Junior– and for what it’s worth, very few of those writing dismissive articles about him in the wake of yet another scandalous, sub-par performance Saturday night– has no concept of real need.

What we see when we look at Julio Cesar Chavez Jr. is a fighter completely built from ego, clever matchmaking, and some genetics. He is the mighty tank in battle, given only a small dribble of gasoline on which to operate; A domesticated bear raised on marshmallows and hamburgers, tossed out into the wild. He is a boxer by profession, but not by calling.

A teenager given a direct route to millions of dollars, fame, and the superstar lifestyle, Junior took what was given to him.

Along the way, and despite matchmaking almost guaranteed to stunt any possible growth, he did show signs of being something other than the punchline of some pudgy blogger’s derision. Critics sometimes forget that Chavez Jr. of 2010-2012, who was showing some solid skills and decent instincts. Total demolition of Andy Lee and Peter Manfredo Jr. flies in the face of the “he’s a fraud” camp and ruins a perfectly good story of nepotism run wild.

Chavez Jr. was no joke for at least a portion of his career and had he kept progressing, he’d be an essential part of the middleweight scene right now.

It would’ve taken extreme focus and determination to keep progressing after several big paydays and a one-sided drubbing in his career-defining bout against Sergio Martinez. A real warrior would’ve called upon that primal instinct for survival, the instinct that first drove him to success, and could’ve re-dedicated himself to overcome the obstacles placed before him. But with no primal instinct on which to call, Chavez Jr. simply crawled inside himself, barricaded himself from criticism, and lashed out at the world.

He would become increasingly difficult to train, his lousy work ethic becoming a poorly-kept inside joke in boxing circles. He was dependent upon boxing for his livelihood, but not at all motivated to actually keep boxing. He was the epitome of the poor rich kid, enslaved by a destiny that he was simultaneously rejecting yet desperately clutching to.

And then he left his enablers at Top Rank Promotions.

Bob Arum and company were able to keep the man-child afloat with clever matchmaking that at least allowed for him to save face through weight embarrassments and in-ring flubs. With new advisor Al Haymon, the money is better, but there is no more clean-up crew for the messes he makes. These last two fights of Junior’s show a man left to hang on the gallows he built for himself.

In terms of marketability, Chavez Jr. is now a dead man walking and his only possible saving grace is if he can somehow get things together and parlay his spoiled schoolyard bully persona into a money-making hate machine ala “Money” Mayweather.

But before we toss heaping mounds of scorn on the man, let’s ask ourselves honestly– If given the same cynical, yet direct path to fame and fortune, how many of us would reject it? And once in the middle of a floundering career, how many of us would walk away from million dollar paychecks rather than grasp at straws to keep the ball rolling for as long as possible? If your history tells you that stomping your foot on the ground and screaming like a child will get you what you want, why wouldn’t you stomp your foot on the ground and insist that an opponent be deducted a point for crossing you (as he successfully did to referee Jose Guadalupe Garcia Saturday night)?

Several years ago, rich men in suits came and flashed millions of dollars before the eyes of some comfortable kid with a famous name. Follow this path, they said, and you’ll be a star. The suits facilitated his rise to stardom, enabled his sense of entitlement, and reaped their rewards.

Don’t blame Frankenstein’s monster for being a monster, blame Dr. Frankenstein for creating him.

You can email Paul at paulmagno@theboxingtribune.com or simply think of him as you lustfully clutch your crusty 1950’s Ring Magazines. You can also buy his book, Notes from the Boxing Underground! Paul is a full member of the Burger King Kids’ Club, a born iconoclast, and an ordained minister in the Universal Life Church.