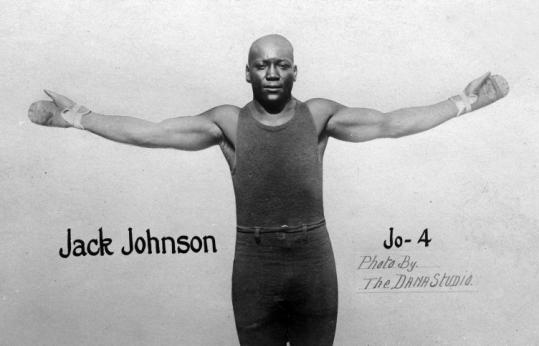 In yet another attempt to pardon Jack Johnson, the first African American heavyweight champion, for a conviction of transporting a white woman across state lines, a violation of the Mann Act, the U.S. Senate has passed an amendment urging the president to pardon Johnson.

On July 17, Senator Harry Reid (D-NV) and John McCain (R-AZ) introduced an amendment to pardon Jack Johnson of his 1913 conviction. The Senate has passed similar amendments over the years and President Obama has not taken action to pardon Johnson.
John McCain released a statement “Jack Johnson is a boxing legend and pioneer whose reputation was wrongly tarnished by a racially-motivated conviction more than a century ago,”

McCain rallied to support the amendment “While this resolution has passed both chambers of Congress several times in recent years, President Obama has refused to take action even though the practice of issuing posthumous pardons has clear precedent. I thank Senator Reid for his continued partnership on this issue and urge the House to send the resolution to the President’s desk. It’s past time for our country to right this historical wrong and restore this great athlete’s legacy.”

Senator Harry Reid, who has been a long-time supporter of boxing, asked the President to take action. “I’m pleased that Senator McCain and I have secured passage of this resolution that corrects a historical injustice,”

Reid was vocal about the injustice of the Johnson conviction, “Jack Johnson was the greatest athlete of his time, a trailblazer for African-Americans and had his life and legacy tarnished by a racially motivated criminal conviction. As we have done for years, Senator McCain and I will continue to fight to restore his legacy and ensure that Jack Johnson is remembered for what he was, an incredible boxer sent to prison by an unfair system. I hope the President will pardon Jack Johnson and repair the legacy of this great man.”

Similar legislation has been introduced and supported by both the House of Representatives and the Senate in recent years, but President Obama has not taken any action to pardon Jack Johnson. Resolutions, where both houses worked together passed in 2009, 2011, 2013, and this year.

Obama has the authority to issue posthumous pardons. Several Presidents, such as President Bill Clinton and President George Bush have pardoned individuals posthumously. The White House continues to make the argument that there are not enough resources to pardon those who have died, and that those resources should be used for the individuals who are living that need to be pardoned. The White House continues to push questions or inquiries over to the Department of Justice to address.