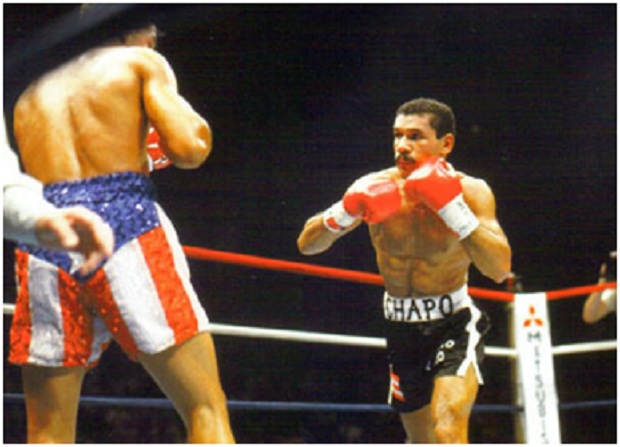 The lineage of great boxers from Puerto Rico is a rich, dramatic and, often tragic one, as many of the great fighter met with difficulties outside the ring or after they finished their careers. In this regard, Puerto Rico has produced a most compelling tapestry of sports in general and boxing in particular.

The first boxing match in Puerto Rico was held on January 15, 1899, and the first Puerto Rican to win a world title was the great Hall of Famer, Sixto “El Gallito” Escobar, who beat Baby Cassanova in 1934 to win bantamweight belt. Sixto was never knocked out or even taken off his feet during his career. He was inducted into the Hall’s Old Timer section in 2002. His career spanned the period 1930-1940. Much has been written about his life, but I’ll leave that most interesting story to be told by other boxing historians. Suffice it to say he remains a beloved figure in Puerto Rico and after his death in 1979. The town of Barceloneta honored his memory by a statue.

But when one discusses boxing in Puerto Rico these days, certain names always come to the fore front; names that remind us of the espléndido y magnífico tradition of Puerto Rican boxing.

This three time world champion, twice in the lightweight division and once in the jr. welterweights slot, ended his great career with a record of 61-7-1-1. Born in Ponce, he moved to New York like so many other Puerto Rican boxers. One of his great wins came against Duilio Loi in 1960. The skilled Italian was 102-1-7 at the time. The list of his opponents reads like an induction ceremony at the Hall. He beat Flash Elorde twice, fought both Sugar Ramos and Ismael Laguna twice, drew with defensive wizard Nicolino Looche, iced Battling Torres who was 31-0 coming in, split a pair with Kenny Lane, and lost his final duke to Ken Buchanan. He retired in 1969, but made a comeback in 1971 winning nine straight fights before Buchanan stopped him in six rounds and ended his memorable career.
His induction into the International Boxing Hall of Fame (IBHF) came in 1991.

This superb body puncher finished with a fine mark of 41-3-1 with two of his defeats coming at the hands of Dick Tiger. Perhaps the best demonstration of his brutal body work came when he stopped Willie Pastrano at Madison Square Garden in 1965. No cherry picker, “Chegui” fought extremely tough opponents including the likes of Randy Sandy, Kid Paret, Tony Dupas, Wilbur McClure, Jose Monon Gonzalez, Florentino “The Ox” Fernandez, Bobo Olson, Gomeo Brennan, and many others. He was a New York City favorite and fought at the Garden no less than seven times.
An Olympian, world champion, author, and administrator (serving as chairman of the New York State Boxing Commission from 1983-1988), he was inducted into the IBHF in 1997.

This triple champion became the youngest fighter in boxing history to win a world title when he decisioned Antonio Cervantes in 1976 to capture the WBA junior welterweight title at 17 years and six months of age. He went undefeated in his first 39 fights until he lost to Sugar Ray Leonard in 1979. Known for his ring skills and defensive artistry, his nickname was “The Bible of Boxing.” His power was best evidenced by his crushing one punch KO of Maurice Hope in 1981 which was a highlight special for years to come. He ended his career with a 53-8-1 slate but like all too many great fighters, he stayed around too long and paid an extremely serious price. Sadly, “El Radar,” who receives a small pension from WBC, suffers from an incurable brain condition and from diabetes as well and requires constant care. To make matters worse, his beloved mother, Clara Rosa Benitez passed away. He was inducted into the IBHF in 1996.

This great triple champion had the ability to render opponents unconscious with either hand. As well, he had one of the highest KO percentages in professional boxing, winning 87.5 % of his bouts by stoppage. His first fight in 1974 ended in a draw; he then reeled off 32 straight wins all by way of stoppage. His first loss came at the hands of the great Salvador Sanchez in 1981 in a much ballyhooed bout. He regrouped and won 9 more before being stopped by Azumah Nelson in 1984. His final record was 44 (KO 42)-3 (KO 3)-1. Reportedly, he had drug problems and issues with the law, but cleaned up his act and became a born-again Christian. The great Gomez was inducted into the IBHF in 1995. Documenting his many issues, a biographical film entitled Bazooka: The Battles of Wilfredo Gómez was produced in 2003 by Cinemar.

This rugged bomber went 25-0 before losing in a major upset to Jose Luis Ramirez in 1984 in San Juan in a classic brawl in which both fighters hit the deck. “Chapo” had taken the Mexican’s measure a year earlier. His final mark was 47-6 with an impressive KO percentage of 77.36. After losing to Frankie Randall in 1993, he stayed away from boxing until 1997 when he won his last five fights. Sadly, he passed away that same year dying of an aneurysm in December, though some say suspected drug addiction played a role. He was only 36.

On January 12, 2006 “El Chapo” was inducted into the Hall, thus becoming the sixth Puerto Rican to enter the Hall, a remarkable feat when one considers the size of this Island nation.
Part Two will appear soon.