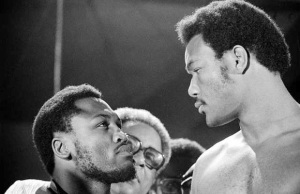 Regular fans at the Historical Fight Night Arena in San Dimas know the promoters’ love of combining a big-man main-event with a little-man co-feature, and tonight’s event is no different. The main event pits George Foreman, at his most devastating after the first Joe Frazier fight, against a guy who, if Sylvester Stallone is the Italian Stallion, is more like the Italian Clydesdale, namely Primo Carnera.

The co-feature? An old-vs-new battle with a 114-pound catchweight between Khaosai Galaxy, perhaps the greatest superfly champion in the short history of that division, and Roman Gonzalez, who needs no time machine to get to the show; if you want to get technical, his “time machine moment” was his last fight, against Brian Viloria, a fight where a combination of devastating power (Viloria tasted canvas for the first time in his career, amateur or pro) and a constant accumulation of punches led to a ninth-round stoppage and, to some, a coronation as the best pound-for-pound fighter in boxing today.

Getting back to the main event, the question on everyone’s mind is basically “how much does size matter?” Big George Foreman is exactly what it says on the tin; a big guy. Carnera, on the other hand, was in his day roughly the equivalent of a Nikolay Valuev when contrasted against the barely-above-light-heavy contenders of the day; compared to George, he’s more like a Klitschko brother size-wise. Can he prevail by force of will and superior physical stature?

The commentary team pointed out that this fight was going to come down to noticing the little things, and in this case, “the little things” amounted to the two times in his career that Galaxy had been on the floor, when contrasted against Gonzalez, who has never been down and who, in the Viloria fight, clearly and obviously had been hit by a body shot that against any other fighter would’ve had the same effect as the shot that Micky Ward used to end the fight with Alfonso Sanchez. Gonzalez recovered on his feet while continuing to absorb punishment, not throwing a punch for a solid 30 seconds…and knocking his opponent out a round later.

Gonzalez is made of iron is the point here.

For Gonzalez, the rhythm of this fight was more like the contest with Edgar Sosa. To allow Galaxy to find his range and go to work is suicide; Galaxy is sufficiently skilled and throws crisp enough shots that all it would be for anyone foolish enough to let him get off quickly is a beatdown, punches coming early and often.

Chocolatito saw no such obstacle in his own way, nor was there any need for tactical subtlety; nobody in perhaps the history of the flyweight division has thrown such utterly improbable combinations involving a dozen punches.

In the Viloria fight, Jim Lampley pointed out how Gonzalez’s hook to the body followed by the uppercut are, in essence, a mirror image of Mike Tyson, and Gonzalez hit with the force of Mike Tyson through the first round. This was getting ugly in a hurry, a man determined (and trained by Historical Fight Night veteran Alexis Arguello) to send this time machine interloper back from when he came.

Which is all well and good, but Galaxy’s not Glass Joe in there. You can’t time Gonzalez coming in, you can hardly hope to time his unpredictable use of combinations with punches of varying force, but you can figure out when he’s done and pop him one with an uppercut, and that’s what Galaxy did…

…or tried to. There’s another element to Chocolatito’s game left unaccounted for in that strategy, namely his incredible footwork and head movement as he gets out the side door after finishing his combinations. The uppercut landed, but only in the mathematician’s-answer strict constructionist use of the term “landed”. It glanced off the cheek rather than thumping the point of the chin.

Put another 10-9 round in the books, folks, and strap in.

Did we mention that hook to the body? Well, it wasn’t just a love tap to soften a defense. One other thing in Gonzalez’s arsenal is his ability to vary up the force of his blows so you don’t know which ones to really brace yourself against and which ones are the intermezzo during which you could possibly punch in between the shots at lesser risk to yourself. Those who have tried to counter in the middle of a Gonzalez assault have learned that’s a gambling game, specifically Russian roulette.

Galaxy began to fade. Two pounds’ worth of weight advantage from the David Griman fight (who, incidentally, would go on to become a world title holder a few fights after Galaxy handed him his first pro loss) in this superfly contest masquerading as a flyweight catchweight tilt weren’t exactly some heavyweight getting 20.

The attack was relentless, the defense impregnable, the uppercuts behind the hook doing, as Lampley again said while quoting Mike Tyson, their best to drive Khaosai Galaxy’s nose into his brain.

It was beginning to become evident just what we were all witnessing here. It was getting ugly.

Galaxy got in close, hoping to change the timbre of the fight by uglying it up on the inside.

Finally, and in keeping with the distinctly Asian cultural meme of “four equals death”, Gonzalez unleashed a punch less rooted in the arsenal of boxing (except when Joe Louis threw it) and more a part of the ninja’s toolkit; he landed a short, six-inch straight right hand that landed with such concussive force upon the chin of a charging Galaxy that you could almost hear the cheesy electrical sound effect from those old Jacob’s Ladders in bad sci-fi B-movies as the pride of Thailand went not just down, but out like a snuffed candle.

Referee Raul Caiz didn’t waste his time on a count. He waved it off and got the medics in there to make sure they weren’t shipping Galaxy back to his own time in a box.

The right uppercut that Carnera landed on the chin of Jack Sharkey is one of the greatest knockout blows ever administered in the history of the sweet science. The way Sharkey landed flat on his face and motionless, you’d have been forgiven for thinking the Ambling Alp had killed him. It was a massive blow, a shot heard ’round the world.

On the other hand, the Foreman time machine fight here is the one that generated one of the most iconic announcer calls ever, Howard Cosell’s famous “DOWN GOES FRAZIER” call when Big George put Joe Frazier down for the first of what would be six knockdowns in two rounds.

Cosell also pointed out that Foreman was, normally, not a very strong starter, but the forces aligned here to produce a perfect storm. Carnera, despite standing two inches taller and enjoying a full six-inch reach advantage over Big George (85 inches to 79; Carnera was built like an NBA power forward), got a reputation as a swarmer in his day, devoid of subtlety, perhaps more Nikolay Valuev than even the intro fully implied.

After all, Max Baer dropped Carnera ten times and…

Yep, while the commentators were laying the scene, Foreman was laying the lumber in the form of that big left hook, and since Big George did only have the two inches in height to contend with rather than having to look up like Sharkey had, the hook came at an angle that did not sacrifice leverage for verticality. The shot toppled Carnera, and the rout was on.

When Carnera rose, Foreman slipped the Italian’s renowned, Klitschko-like left jab; unlike Wlad or Vittles, Carnera didn’t have quite the same aptitude for clutching when the close-quarters fighting got to be out of his control; he could maul and lean, but he left Foreman with enough room to punch that his body was getting pounded like a side of beef in a Rocky flick.

Carnera stayed upright…but as he made his way to his corner after the bell, he probably wished he hadn’t.

Foreman kept up the attack, a relentless stream of lefts and rights from all angles as Carnera, badly hurt by not only the head shot that had dropped him but the body shots that were beginning to render him a dull, achy, mentally breaking fighter, came out slow and sluggish. Foreman, knowing an opportunity when he saw one and inspired by the little devil who’d come in the fight before his own, decided for fun to try his hand at Chocolatito’s combination, unleashing a left hook to the body followed by an uppercut.

It worked, because that’s just the kind of fight this fight had become. Carnera rose at the count of five, but he looked not long for this world.

Foreman went back to the shots that had disposed of Frazier. Rather than try to double up the left hand, Foreman uncorked the right uppercut and the rising right cross as his second punch of the combination.

That did the trick. A right uppercut landed on the same spot at the point of Carnera’s chin, and it was nighty-night; Carnera would not beat the third count.

Next Friday is February 5, and you know what starts on February 5 this year? That’s right, it’s Carnival in Rio de Janeiro, and what better way to celebrate than with a Brazilian fighter? Acelino Freitas steps into the ring, and his opponent? How about Genaro Hernandez, a guy who will also be appearing on Historical Fight Night for the first time. Samba! Scantily-clad women! Churrasco (delicious, wonderful, the-world-is-in-your-debt-Brazil churrasco!) It’s an event not to be missed.

In the co-feature, Mike Weaver makes his Historical Fight Night debut; a man whose WBA title served mainly to be “the other belt” after Larry Holmes had disposed of him in 1980 gets a chance to show that he deserves recognition in his own right, as he steps into the ring with Ron Lyle.

As always, thank you so much for reading, and if you like what you see here and want to help support the production of the best boxing show on the Internet, why not head on over to Patreon and donate? A few dollars of your appreciation goes a long way toward helping bring you these episodes every Friday afternoon, so please do consider signing up, no matter how small the donation.

We’ll see you next week!