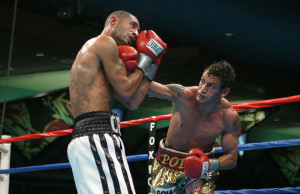 It’s Carnival in Rio, and what better way to celebrate than with the first appearance on Historical Fight Night of one of Brazil’s greatest champions? Acelino Freitas gets in the time machine from a four-round smackdown of Juan Carlos Ramirez, and he arrives in 2016 to take on Genaro Hernandez, master of the good old Mexican one-two punch, who is himself coming in via time machine from eight rounds of turning Jorge Ramirez into hamburger in 1994.

Will the crafty defense and boxing skill of Hernandez be able to hold off the devastating power of Popo Freitas? Or will skill beat thrill and cast a pall over the Brazilian festivities in Rio this week?

Meanwhile, we’ve got a dispense-with-the-pleasantries co-feature, as Mike Weaver steps into the time machine fresh off what could be considered his last hurrah as a serious fighter, a two-round destruction of Carl “The Truth” Williams in 1986, the last loss for Williams before a three-year run of success that ended at the hands of Mike Tyson in July of ’89.

Weaver takes on Ron Lyle, who is himself inserted into the action from a win during what was otherwise a down stretch. He’d been beaten by Jimmy Young and Muhammad Ali, and in his next fight he was to get smacked by George Foreman, but on this occasion, he’s coming in off a six-round KO victory over Earnie Shavers.

Lyle took shots from one of the hardest-punching heavyweights who ever lived. Will Weaver be able to crack Ron’s chin?

Mike Weaver stopped Carl Williams with a monster left hook. Ron Lyle got dropped in the second round by Earnie Shavers with…a monster left hook. Then again, Lyle also dropped George Foreman twice with his big, powerful right hand, and that has all the makings of a who-can-get-the-big-punch-there-faster slugfest. Hope the pizza’s already arrived, because if you answer the door for the pizza guy, you might miss this one.

The earlygame of this fight was a feeling-out process, neither man wanting to recklessly engage knowing the other’s power. Lyle tried to measure Weaver with his jab, looking for the ideal range to bring the right over the top. Weaver circled away from his own position to throw the left, not wanting to rotate straight into that right hand he knew would inevitably come, preferring to measure with the right.

Weaver was always a bit of a slow starter; Lyle obliged him for the first three minutes of this contest.

As the second round began, it was time for Weaver to test his ability to control range, and he came forward, trying to back Lyle up.

Which would’ve been great if Lyle obliged, but rather than back up to the ropes and try to fight his way off of them, the man from Dayton, Ohio instead brought one of those right hands, which landed flush. The Texan, giving up two inches in height to Ron Lyle, staggered back, and Lyle gave chase, unleashing a flurry with both hands that left Weaver trying to bob and cover and otherwise avoid the shots, and after a few punches failed to find their mark, Weaver unleashed a monster of a counter left hook. Next thing anyone knew, Mills Lane was into his count:

Lyle rose, the cobwebs as clear to the observer as when he’d been rocked by a similar shot by Shavers in his time machine fight. Mike Weaver had the advantage, and he moved in for the kill.

Lyle weathered the storm, taking a torrent of punishment, the left hook coming in and reloading in a relentless cadence reminiscent of standing in the line of fire of a machine gun.

Trouble is, when you’re a machine gunner, at some point you have to reload the ammo or swap out the barrel, and that’s when your enemy can pop out with a rifle and plug you right between the eyes.

“Right between the eyes” is exactly what that overhand power shot from the orthodox stance was and where it landed. Weaver went down like he’d been shot. He rose at the count of seven, and now it was Lyle’s turn to press the attack and try to put an end to the contest with 45 seconds to go in the round.

Lyle dropped a left hook to the body to lower the guard of Weaver, who took the bait; with a thunderous overhand right, one that (to steal a line from Mike Tyson regarding his uppercut) tried to ram Weaver’s nose into his brain, Lyle landed the exact same shot on the exact same location on the face of his enemy, and the double tap, as sure as pulling the trigger a second time on a semi-automatic handgun, scrambled the brain of the now helpless Weaver; he retreated to the ropes, on spaghetti legs, and Lyle poured on the punishment.

Finally, with the bell so close that some in attendance could be forgiven for believing the timekeeper added a few extra seconds to the round, Lyle landed a beautiful one-two combination, beginning with a left hook and following it up with a third shot between the eyes from the overhand right.

Mills Lane didn’t even need to count. This one was over; Ron Lyle was your winner, and Lyle-Weaver Round 2 made its case for Round of the Year in the process.

These two fighters had a common opponent in Anatoly Alexandrov, the man from whom Freitas won the WBO junior lightweight title. Hernandez won a tough split decision over the USSR-born Alexandrov, while Freitas damn near killed the Russian when he dropped him in such a way as to render Alexandrov unconscious for five full minutes and necessitate the use of a stretcher to get him out of the ring.

Something to think about as we begin…

Hernandez was a technician of the finest order, a man whose understanding of the sport was so thorough that after his pugilistic days were over in the ring, he became the CompuBox punch stats operator for ESPN2 in the early days of Friday Night Fights. He threw a snappy jab, a straight right, in many ways he was a half-sized Klitschko in the ring, just much less prone to jab-and-grab tactics.

Freitas wasn’t above throwing big, looping left hooks if he felt like he could land them, and when he landed them, he tended to blast opponents out of the ring.

So it went, with Hernandez trying to punch inside the wide shots coming at him from the Brazilian, and for the first round, he had a fair degree of success using the jab. He landed a few straight rights, but the problem came when Freitas, who was no stranger to the canvas, having been dropped plenty of times in his career even in fights he won, simply stood up to them, the Mexican’s power providing no material threat other than to disrupt the attacks coming at him and to score points.

Hernandez kept up his effective defense, keeping Freitas at bay through the first half of the round. Trouble was, when someone landed a clean shot with bad intentions on Hernandez, that’s why both of his pro losses over his entire career were by knockout. Oscar De La Hoya and Floyd Mayweather both used a well-placed power shot to alter the course of the fight.

Which is how a Freitas right hand got over the top and landed flush on the chin of the Mexican. He was on the back foot now, retreating, trying to survive, and leaving himself open to attack by not offering any resistance coming back at the man trying to knock his head off.

Sure, he stayed on his feet for long enough to get to the bell, but it wasn’t looking good.

Freitas came right back for more in the third, and he shortened up his shots to try and disrupt the defensive timing that Hernandez employed to take the edge off the shots.

Sure enough, a right hand got through, rocking Hernandez, who dropped his hands as a result of getting his brain momentarily short-circuited; this left an opening into which Freitas inserted a monster, looping left hook with all his leverage on it.

Smashed in the side of the head with such a haymaker, Hernandez crumpled to the canvas in as bad a shape as the Russian had been when Freitas popped him with a similar shot.

The referee could have counted to a hundred; wouldn’t have made a difference. This was a knockout…out cold.

The biggest fights we haven’t done yet are on tap, and we’ve done some big fights. The main event? Muhammad Ali vs. Joe Louis. The co-feature? Marvin Hagler vs. Carlos Monzon.