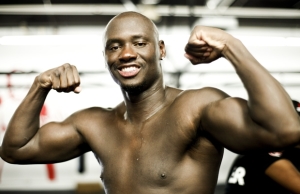 What happens when you put Criminally Overrated in against Never Quite Good Enough? Antonio Tarver went through a career of scoring improbable knockouts in fights in which he was getting his ass kicked (the second Eric Harding fight, after Harding actually did kick Tarver’s ass in their first go-round) and landing lucky shots (the second Roy Jones fight, one of only seven punches he landed in that two-round contest, and arguably a quick-hook stoppage by infamous quick-hook referee Jay Nady.)

Tonight? He takes on Eddie Gregory (who hadn’t yet changed his name to Eddie Mustafa Muhammad at the time we put him in the time machine, after the Marvin Johnson fight), who lost his first title challenge against Victor Galindez before an unimpressive title reign in 1980-81, fighting three relatively soft opponents for a two-belt-era champion (Johnson, Jerry Martin, and Rudy Koopmans) before losing the belt to Michael Spinks. Considering that Gregory did change his name before the Martin fight, he has the interesting distinction of being one of four men with the Prophet’s name to beat Jerry Martin, who also lost to Matthew Saad Muhammad, Dwight Muhammad Qawi, and Prince Mama Mohammed, that last being the only one who was actually born with the name (the other three took the names when they converted to Islam later in life.)

The question here is whether Tarver’s devastating counter-punching power (never more evident than in the aforementioned Jones fight, where he straight-up beat Roy to the punch and floored him with the left hand) is going to be enough to stop the vicious straight right hand and powerful uppercut of Muhammad.

Meanwhile, our co-feature is Ricardo Mayorga against Antonio Margarito, and the Temporal Commission’s ensured that there will be no shenanigans involving hand wraps. Plus, Margarito’s being supervised the way a prisoner in supermax is supervised. There will be no juicing, no cheating, and no pall cast over this fight, and we’re pulling him from after the Roberto Garcia fight in order to ensure that Margarito’s historical context is after his suspension but before he had his eye turned into hamburger first by Manny Pacquiao and then by a pissed-off Miguel Cotto.

Mayorga, for his part, is coming in from his fight against Michele Piccirillo, who shows up for the second time in as many weeks as the time-machine-moment losing fighter, which surely augurs for his eventual inclusion on the program. Rumors floated around the Temporal Commission that perhaps John Mugabi may be coming back, but that’s for another day.

The “Margacheato” label is so much a part of Antonio Margarito’s legacy that it even hangs over a historical contest like a pall. Even though we’ve pulled Margarito from his victory over Roberto Garcia rather than the smackdowns he suffered at the hands of Manny Pacquiao and Miguel Cotto, the question remains whether he was the same fighter after that one-year suspension.

His eye hasn’t been destroyed yet, but will Mayorga be able to do to it what Pac-Man did? Put another way, was that eye at the limit of its lifetime ability to take damage?

Margarito just didn’t have the same pop in his gloves that he’d had when he knew there was plaster of Paris to do his job for him. The evidence of his cheating was overwhelming when he was caught red-handed in the Shane Mosley fight. Mayorga approached the fight with the belief the the clipped wings of the dirty bird wouldn’t be able to hurt him.

For most of the first round, Mayorga got the better ends of the exchanges, attacking up top, swinging in looping, clubbing left hands, and controlling the pace of the action.

There was some controversy in the second, as Mayorga landed a sweeping left hook right on the eye of Margarito, followed almost immediately thereafter, as he tried to follow up and Margarito tried to escape out the side door, by a monster head clash that, while it did not immediately cause Margarito to gush blood, it did crack his orbital bone.

We may yet have an answer to whether it was the skill of Pacquiao or just the physiology of Margarito that caused his eye to fall apart.

Meanwhile, Mayorga had himself a target. As the swelling got worse and the blood began to flow, a ruling had to be made, and Steve Smoger ruled the damage as having been caused by the punch and not by the head clash. There would be no technical decision or, if this ended inside the first four rounds, no declaration of a no-contest.

Mayorga attacked the right side, and the more punches he threw up top, the less able Margarito was to see them. What’s more, the counterattacks were not strong, they were not crisp, they were not damaging, and Mayorga got bolder with attacking a man he believed had no capacity to hurt him.

43 seconds into the fourth round, Mayorga set up with the right hand, distracting the attention of Margarito…and that was all by way of bringing in a left hook that Margarito never saw coming and that caught him completely by surprise.

Margarito went down like he’d been hit with a baseball bat. Smoger didn’t even bring in a count; he simply stopped the fight in as much time as it took Antonio Margarito to land on the canvas.

Once again, as a reminder, we are referring to Eddie Gregory by that name because it’s the name he himself was still known by on the day he stepped into the time machine, and the name under which he was billed on that card. Later history may know him by his later name, but for all intents and purposes, this is a temporal sidestep from 1980, not a transformation. We have retained the Mustafa Muhammad name in the headline for the sole benefit of those using search engines to find this story.

The question at issue here is one of what happens when a guy who gets insulted if you miss him but who has solid power in both hands faces a guy who is a master counter puncher with one-punch power who doesn’t like to be the aggressor. Will Gregory engage on Tarver’s terms, or will this end up more like Tarver’s first fight with Roy Jones?

For the first round, at least, it looked like the latter. Tarver immediately adopted a defensive stance, and Gregory, a guy who was infamous for his lack of aggression in his decision losses, did not willingly venture into the range where Tarver could do damage.

Gregory was giving up two inches in height and reach here, so engaging from the outside was right out. He would have to close distance, work behind his jab, and get on the inside in order to do work and do damage.

For the first round, at least, that simply wasn’t happening. The two fighters combined to throw only 32 punches; Gregory threw 20, and Tarver threw 12; neither man landed more than four shots (Gregory, to Tarver’s three), none of which were in any way solid or effective.

Second verse, same as the first, a little bit louder and a little bit worse, as once again neither man wanted to engage. The crowd started getting restless, and the commentators couldn’t help but think of the mayhem that has happened in this arena when a historical what-if story turns into something more akin to the NBA’s infamous Malice in the Palace game.

Someone mentioned Nigel Benn’s cheeseburger, and as the boo birds cranked up the volume, it had little effect on the men in the ring.

Can boxing literature descend into something in the theater of the absurd genre? Because there was something very, very Samuel Beckett about this fight. “Waiting For KO”, perhaps. Or something with a bit of an Andy Warhol flavor to it.

Whatever it was, it wasn’t fighting. Gregory occasionally came forward, but a Tarver right hand sent him back. When Gregory did land, it was with a single shot or a two-punch combination that served no valuable purpose insofar as it didn’t hurt Tarver, and when the punching was done, there was no place to safely retreat, so the fighters either got tangled up in the middle of the ring or else would-be aggression faded to a withering retreat with the hands up.

Someone checked the CompuBox stats through eight rounds. For total power punches, Gregory was 5-of-84, while Tarver connected on 11 of 115 shots. Neither man averaged better than two connects a round.

The scores generally favored Tarver; his ring generalship was one of the few bright spots in this boring fight. Fans may have been retreating toward the exit when they weren’t shouting “C’mon and fight, ya bums” or similar heckler’s insults, but at least nobody was throwing things.

For referee Steve Smoger, at least he didn’t have to worry himself overmuch about keeping order.

Finally, in the last round, this fight was brought to a merciful end by the advent of the final bell. Over the last four rounds, there were two critical moments in the fight that, rather than creating excitement, simply served to reinforce that there would be no action worth discussing in the late rounds.

In the ninth, Tarver landed a stinging counter right hook out of the southpaw stance that stunned Gregory and forced him backward; Gregory’s punch output in the tenth round ended up being his lowest of the entire fight, even compared against that wretched first round; he landed only two of sixteen punches total.

Again in the 11th, Tarver landed a hard right hand; had Gregory had the courtesy to fall down, it might have rescued the contest, but he instead retreated and countered with his jab when Tarver tried to pursue; Tarver, being naturally of a more cautious temperament, did not press the action. The effect was the same as in the ninth and tenth; it merely make Gregory too timid to attack.

The Historical Fight Night Arena goes dark next week, as your columnist is going to be taking a cross-country road trip to set up in new digs; things will be a bit too up in the air to promise a proper effort, so better to delay it a week than to half-ass it.

We’ll be back on April 2, and it’s Carmen Basilio’s birthday. We celebrate the Upstate Onion Farmer by throwing him into a welterweight contest. When last we saw Basilio, he fought to a fifth-round technical draw with Carlos Palomino after an accidental clash of heads.

This time around? We’re throwing him in with Pernell Whitaker. Irresistible force, meet immovable object.

Your co-feature? Ray Mercer’s got a birthday on April 4, and that’s close enough for our taste. He gets a shot at Jerry Quarry that should be a Pier Six brawl.

We’ll see you in two weeks, and thanks for reading!