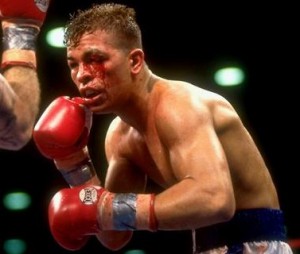 Sometimes we like to put on technical matchups between highly skilled fighters to determine the greatest boxers of all time here at the Historical Fight Night Arena. Other times, we create savage entertainment for the baser elements of boxing society in which guys are put in there and told to punch each other until one of them simply cannot stand up anymore, then we ship ’em off to the 27th century for medical attention before returning them to their own time, while a bunch of baying barbarians call for satisfaction to their bloodlust.

Which is how Ray “Boom Boom” Mancini ended up in a time machine after the Ernesto Espana fight and Arturo Gatti found himself spirited away from his fight with Gabriel Ruelas. Gatti weighed in at 130 for that fight but weighed 146 on the actual night of the bout, so bringing him up to lightweight simply heads off the Reyes Munoz/Joey Gamache problem where a middleweight Gatti fought junior welterweights and nearly killed them.

Your co-feature? How about Livingstone Bramble, pulled from the Harold Brazier fight, in against Lucas Matthysse, who in order to save him from the effects of his recent wars, gets a three-year temporal boost via the Lamont Peterson fight so we’ve got him at his best? Does that sound like fun? It should. We’re going full Thomas Hobbes state of nature tonight: Nasty, brutish, and short.

Did we mention that tonight’s fights are being held in that 15’6″ smaller-than-regulation ring we salvaged from Montreal in the David Lemieux-Elvin Ayala fight (and by fight we mean one-sided first-round beatdown)? Because we’ve rolled the Phone Booth out of mothballs for tonight’s card.

Matthysse’s fight plan was to force Bramble into a close slugfest, and take advantage of one of Bramble’s biggest technical weaknesses. With that in mind…

Matthysse knew that Bramble’s jab to the body was a lunging shot that frequently left him out of position, like the one Erik Morales often got himself in trouble trying to throw. When Bramble came out fighting a fairly traditional attack, the Argentine raised his guard and set his elbows wide on purpose, not because he wanted to eat an uppercut (one was not likely forthcoming), but because he wanted to bait Bramble into throwing that jab downstairs.

Bramble ate the bait, immediately followed by a delicious left hook that came right over the top as Bramble was on the way in. It was perfect timing, a sucker’s bet that only someone with a lightning hook with a world of bad intentions, a punch hard enough to drop Peterson even when it didn’t land flush in the second round of the time machine fight, could throw.

Bramble was stunned; Matthysse was on the warpath. Not for nothing did Matthysse knock out so many of his victims at the height of his powers, and he didn’t let his foot off the throat of his opponent. When Lucas landed two more left hooks in rapid succession, things went off the rails for Bramble in a hurry. It was similar in its way to the Edwin Rosario fight for Bramble, except that one made it into the second round.

Bramble stumbled back, Matthysse pursued, and thanks to the small ring, he didn’t have to go far. The assault continued, and when Bramble tried to punch back, he got nailed with a clean left hook, went down like he’d died, and this one was over in two minutes and thirty-five seconds.

Key thing to remember with this fight is that Mancini was put in the time machine before the Duk Koo Kim fight; Mancini maintains his fury because that little seed in his mind that came from killing a man with his own hands hadn’t been planted yet. What’s more, Mancini was a flash in the pan of sorts; he was 21 years old when he fought Ernesto Espana in the fight from which he’s gone into the time machine. Mancini’s last pro victory came about two months before his 23rd birthday; he lost two fights to Livingstone Bramble, had one failed comeback against Hector Camacho, another against Greg Haugen, and was never seen or heard from again in a ring.

Gatti? Well, a good argument could be made that the best was yet to come in 1997. Even though he lost his next three fights after the Ruelas fight, all at lightweight, when he finally found a weight he could make without becoming a mess on fight night, he established himself as one of the best the junior welterweight class had to offer, first in a couple of farcical fights against Munoz and Gamache, later in three wars with Micky Ward, and then in a run as champion that continued right up until he ran face-first into Floyd Mayweather.

Would the naturally much bigger man prevail here? Gatti made the 135-pound limit with a bit of difficulty even though he’d done 130 in a time machine. He rehydrated all the way up to the junior middleweight limit. Gatti had easily 15 pounds on Mancini to go with two inches in height and five in reach…

But, as Larry Merchant once said, “Arturo Gatti eats punches the way some people eat french fries.” Mancini took full advantage, as he tried to test two things that he could work to his advantage as the fight went on.

The first test was to see if Mancini could do real damage to the face of Gatti, who tends to swell up if you look at him funny. The second test was the one that so many fighters figured out, from Manfredy to Robinson to Ward; whether you could bait Gatti out of his surprisingly skilled boxer’s mentality and drag him into a brawl. When Gatti gets sloppy, he’s that much easier to hit.

In the first round, Mancini landed the jab at will. The left hook? Landed at will. Overhand right? “Thrown” and “Landed” in the CompuBox stats might as well have been on the same button. Uppercut? Well, Mancini wasn’t much for throwing them. He probably could’ve landed those too.

Point of the matter was that Gatti was getting tattooed for three minutes, and the first round was easy to score.

Gatti had a bit of a mouse under his right eye after the first round, and that was enough to draw the red mist over his eyes. Gatti came up looking to straight-up trade with Mancini, imposing his weight advantage, and he went to a hook of his own.

Ray took the bait. Any semblance of civilization that the bout had to offer went right out the window, the two men whaling away at each other, Gatti landing harder punches, Mancini landing more of them. Gatti’s right eye looked like it was going to start closing…in the second round. Mancini took a couple of utterly vicious left hands, and the question became one of which man would break first.

Gatti was stopped five times in his nine-defeat career. Mancini fell in three of his five losses. Take your pick.

Mancini dropped his hook to the body in an effort to change the geography of the fight. Gatti wasn’t ready for it, and much as he did in the ninth round of the Micky Ward fight, when Thunder got hit right on the liver, he went down and needed the count of nine from Benjy Esteves to get his wind.

Mancini pounced on the opportunity. He had his man hurt, and he went upstairs looking to scramble the brain of Gatti. Unlike Ward, who had the weight of eight and a half rounds of a war on his hands, Mancini was fresh. He paced himself, distributing his shots, applying pressure, forcing Gatti back. It was brutal. It was vicious. Many in attendance could not believe their eyes when Gatti survived the round. The crowd exploded, and Gatti’s cornermen attended to him as the right eye continued to close.

Desperation oozed from every pore of Gatti’s body as he came out for the fourth round. Mancini’s assault had halfway blinded him, but he could still, for now, see out his left eye. It was time to use his weight advantage to full effect, and Gatti started shoving Mancini around, imposing his physicality, unleashing a barrage of combinations to the head of Boom Boom, trying to make an omelette out of his brains with the concussive force of his blows.

The attack was relentless, it was unholy…and it was successful. A big right hand came right over the top and Mancini went down. Esteves counted in front of a downed fighter to get to six and a standing fighter for the seventh and eighth tick of the clock before waving the fighters to resume.

Gatti had, to a small degree, punched himself out. Mancini went in and took his turn, attacking the swollen right eye with his jab and, with a bit of fortune and a lot of accuracy, creating swelling on the left eye of Gatti as well with a couple of right hands.

Mancini may have been hurt, but Gatti looked like he’d been stung by a nest of hornets.

They say the punch that finishes you is the one you never see. Mancini began to attack the new injury on Gatti’s left eye, moving in a way where Arturo could see him, but at the same time neutralizing any left hooks that may have come at him by putting the straight right in first. Gatti continued to swell, the effect on his face not wildly out of line with the forensics involved in a baseball bat attack.

Gatti started moving to his right to try and take away the effect of the right hands coming at him…and that’s when Mancini landed a left hook up top that Gatti never saw coming and which landed with nuclear force. Gatti went down, and there was no way Esteves was going to count to anything less than fifty before Gatti got up.

Ten was enough. This fight was over.

It’s time to let the giants take the stage, as we’ve got not just heavyweights, but super-sized Industrial Strength heavyweights.

In your main event, Primo Carnera steps right out of 1933 in order to take on Lennox Lewis. Your co-feature? John Tate, all 240 pounds of him, steps into the time machine from the Gerrie Coetzee fight and finds himself in a scrap with Sam Peter. Minor champs? Sure, but that’s why they’re co-featured players. Between the four guys in the contest next week, we’re looking at nearly half a ton of humanity chucking leather. Pop the big tub of popcorn for this one, folks.

We’ll see you next Saturday, April 16, right here on the Boxing Tribune, for another edition of Historical Fight Night. Thanks for reading!