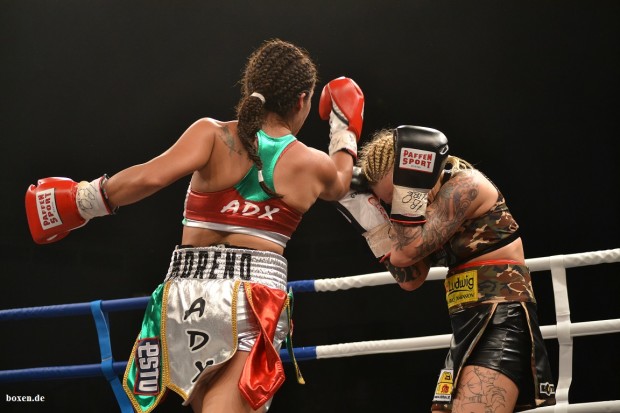 Fighting in front of a home crowd, Voraberger was making the first defense of the IBO, WIBF, and GBU super flyweight titles she won in September.  She had lost two of those titles to Nina Stojanovic in a contest for the Unified Women’s championship.

Moreno was a former WBC light flyweight champ and had a good stretch as the WBC Youth and Silver champ in the same division.  Last September she lost to Ibeth Zamora Silva in an attempt to regain that WBC strap before moving up in weight for her next bout.

Moreno was the busier and more aggressive of the two, and her volume punching paid off as she was able to deck the defending champ in the fifth frame.  Final scores came in at 100:98 and 96:94 for Moreno while one judge saw the fight even at 95:95.  Voraberger stated through social media that she was looking forward to a rematch.

The vacant GBC and WIBF super lightweight titles were won by Alicia Melina Kummer (10-1, 8 KO’s) after a 10 round decision over Zsofia Bedo (15-37-1, 3 KO’s) in Niedersachsen, Germany.  Kummer took one sided scores of 100:90 twice and 99:91 over Bedo who’s only won three of her last 10 outings.  Kummer is also the recognized GBA lightweight champ.

Su-Yun Hong (14-1-1, 7 KO’s) retained the WIBA light flyweight title with a unanimous decision over Jujeath Nagaowa (13-17-1, 8 KO’s).  It was Hong’s fourth defense; she is also the former WBO minimum-weight champ.