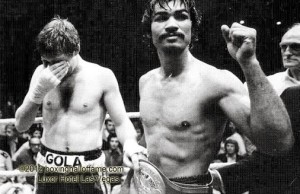 One of the most-wanted fights by fans in the late Seventies was Carlos Palomino vs. Pipino Cuevas; one held the WBC belt, the other the WBA, but there was never a unification fight to bring the two titles together. The Temporal Commission, with a time machine and the ability to threaten to send a guy back to the Roman Empire with a cross around his neck if he refused to take the fight, made the fight rather easily. It’s good to have control of elements beyond the ken of mortal man, especially if these Clarke-inspired magicians are fight fans.

Your co-feature is a welterweight contest that could just as easily have been contested at junior middleweight, as Thomas Hearns, put into the time machine from his own two-round demolition of Cuevas, taking on Felix Trinidad, who comes into the fight from his win over Freddie Pendleton. Trinidad had a big punch, but he’s giving up six inches in reach and facing a man who was fighting at a weight where almost none who opposed him could stand up to his power. Does Trinidad have a chance?

Hearns fought range wars in his younger days. Gifted with a 6’2″ height and a basketball-like 78-inch reach, Hearns could keep just about anyone at the end of his jab right up to the point where he was fighting super middleweights and light heavyweights late in his career. His straight right came from much further away than his opponents expected, and was worlds more difficult to counter with the hook precisely because Hearns’s head was far enough away to avoid the incoming blow.

Trinidad was a big welterweight too, but at 5’11” and with a 72-inch reach, he wasn’t going to be able to put leather on the face of Hearns without risking his hide in the process.

Trinidad went with a strategy of trying to put the right hand over Tommy’s range-finding, occasionally lazy left, hoping to tag Hearns the way he’d been able to get to Pendleton in the time machine fight.

Hearns rewarded this strategy by landing a counter left hook only 15 seconds into the fight that rocked Trinidad and sent him onto the back foot. Hearns pursued, pouring on punishment with both hands, bringing that big right hand over the top and pummeling Trinidad. While Felix tried to come back with a left hook to try and blunt the relentless attack, Hearns had carefully chosen his range and was able to dodge or just plain force a short-arm on the incoming blows, and as soon as he’d made his man miss, he made him pay, sometimes with a right hand of his own, other times with a two-punch combination of left and right, in all cases making Trinidad guess where the punch was coming from.

Pipino Cuevas had been unable to solve the Hitman in the time machine fight; Trinidad was similarly flummoxed by a guy who was simply able to out-range him on every shot, all while showing perfect timing and a deceptively strong ability to box.

Late in the round, Trinidad attempted a straight right to try and score some damage, and just as with 15 seconds gone in the round, Hearns had landed cleanly, this time a clean and devastating counter, first with the jab, then with a perfectly placed overhand right, put an end to the action.

Felix Trinidad was out cold; Tommy Hearns, as he had done to every fighter ever to face him at or below the welterweight limit, had simply smashed him.

The timing here has been chosen to best simulate what would happen if the two men, who won their respective titles on the days specified, immediately fought to unify. Palomino comes in from a win over John H. Stracey; Cuevas comes in from a knockout of Angel Espada, a fight which, incidentally, wasn’t supposed to be a win for Cuevas, an 18-year-old kid who had lost his last fight to a journeyman (Andy Price.)

Cuevas was an old-school Mexican fighter who turned pro at 13 (on November 14, 1971; Cuevas was born on December 22, 1957.) 12 fights into his career and still not yet sixteen, Cuevas was 7-5. When he finally came of age? He defended that WBA welterweight title 11 times before Tommy Hearns beat the crap out of him. Curiously, Cuevas was never again a major player in boxing despite losing the title at the age of only 22; he was 8-8 in his last 16 fights before retiring in 1989, still only aged 31, after an 18-year career.

Palomino was 23 when he turned pro; when he stepped into the time machine, he did so at the age of 26. Will age and guile beat youth and a promising future?

Cuevas came out looking to rip the left hook into Palomino, who was a guy you could find if you were able to time his looping punches; as the British commentator for the Palomino-Stracey fight put it, Carlos “hardly ever throws a straight punch.”

Palomino ate a couple of those big left hands, but he fared better against them than Trinidad had against Hearns in the prior contest. Cuevas’s aggression was the defining attribute of his strategy; he pressed Palomino, made him uncomfortable, dictated the pace, and frankly beat the hell out of him over the course of the first two rounds, as the second verse was the same as the first. 20-18 was the consensus, as some in attendance began to wonder whether this would go the distance.

Unlike Hearns, Palomino didn’t have the size or the snap on his jab in order to play keep away. He did, however, have quick hands and a willingness to eat one shot to land two. Palomino began to work the body of Cuevas, driving his own left hook right into the meat of Pipino’s midsection, landing bruising shots; after all, it was a left hook to the body that would’ve done Micky Ward proud that ended that time-machine fight in 1976 in the twelfth round.

Palomino was eating plenty of shots of his own, but he wasn’t looking quite so broken as perhaps some would have thought would be the case against a big puncher like Cuevas.

Cuevas re-established himself, continuing to land more of the shots the judges were more likely to see, all the while finding himself vulnerable downstairs. The blows were crushing from both men, one trying to rip the head off his foe, the other trying to knock the body out from under the head of his.

Cuevas got the better end of the exchanges, but the deeper this fight went, the more questionable it became whether Cuevas would have the power to get rid of his opponent. Those in attendance wondered if Cuevas indeed had the endurance to keep up the attack for twelve rounds if he was unable to dispose of the enemy in his sights. The next two rounds were a back-and-forth; depending on who you asked, at the halfway point of the round Cuevas was up either 59-55 or 58-56, but he certainly was up.

The tone of the fight shifted a little as the second half of the scheduled twelve rounds began. Palomino’s body work had begun to change the pace. Cuevas had a little less steam on those hooks he landed up top. Palomino, a bit less concerned about the force of the blows landing upon his visage, put a little more steam on that body shot. From the point of view of the judges, however, it was not quite so perceptible as to change the fundamental question in need of an answer as far as which style you felt was the more effective. Plenty of body punchers don’t get the best of the judging; just ask Ruslan Provodnikov.

After two more rounds of this, some speculated that perhaps Palomino was going to need a knockout. Cuevas, as frustrated as he had become and as drained as his stamina may have been, perhaps needed only a single round more to put the scorecards out of reach. The drama peaked; the tenth round would be do-or-die for a man who had to win the last three to salvage his hopes of a favorable result on the cards.

It is always said in boxing that working the body is like putting money in the bank. If you do it early enough and consistently enough, those punches collect interest.

When a near carbon copy of the left hook to the body that won Palomino the title against Stracey folded Cuevas in half, his face contorted in utter agony, his fist and one of his knees upon the ground as referee Steve Smoger took up the count, his midsection a battered and bruised and well-tenderized human steak, Palomino had not only begun to answer the questions of whether he could pull this out on the cards by ensuring a 10-8 round in his favor, but indeed he raised another about whether the end was nigh for the man who was ahead.

Smoger raised Cuevas’s gloves up, wiped them on his shirt, and signaled the continuation of the contest. Cuevas was in survival mode, but at the tender age of 18, and with the blood of a Mexican warrior boiling in his veins, he didn’t quite have the wherewithal to clinch or properly cover up. He protected himself, sure, but Palomino’s right hand acted as a decoy while the left continued to pound the body.

Cuevas went down again. Again he looked battered and nearly broken. Again his face betrayed the devastation that body punches can cause. And while Cuevas was able to summon the strength to survive the eleventh and twelfth rounds, and while Palomino never quite found the target for the third and what would surely have been the final time, a 10-7 round had thrown a wrench into the punditry on offer.

Judge Dave Moretti had it 113-113 after twelve rounds were completed. Judges Chuck Giampa and Julie Lederman had it 114-112, for your winner, by majority decision…

We’re getting ready for an epic “pay-per-view” to celebrate the one-year anniversary of Historical Fight Night, which ran in its original Friday night slot on May 29 of last year, conceived as a replacement for Friday Night Fights coverage when ESPN’s venerable fight show gave way to Al Haymon’s time buys. The lineup is still in some dispute, but it’s going to be a four-fight throwdown between the very best and most famous we can find.

Before all that, however, we’ve got Ruslan Provodnikov facing off against Arturo Gatti in a 140-pound tilt for next week’s main event. Provodnikov fought Micky Ward on this show, losing a majority decision, and it’s up to the reader to decide whether it was Ward’s left hook or your columnist’s fan loyalties that swung that result. Against Gatti, things should prove to be one hell of an interesting challenge.

Your co-feature? We bring in Junior Jones, fresh off a pair of big wins over Marco Antonio Barrera at 122 pounds, taking on Vuyani Bungu, who somehow managed to miss Jones when both men were players in the junior featherweight division in their own time.

That’s next Saturday, May 21, right here on Historical Fight Night!