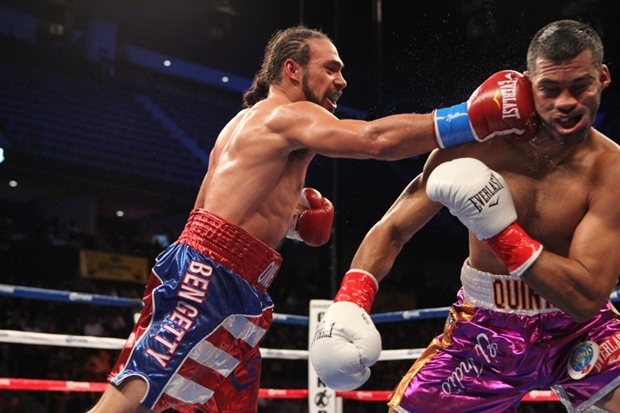 It’s another Old Vs. New Night here at the Historical Fight Night Arena in San Dimas, as Keith “One Time” Thurman, awaiting Shawn Porter in our prime timeline, takes a moment for a blast from the past (temporal shenanigans, grandfather paradoxes, it’s complicated) against Ike Quartey.

Meanwhile, we’ve got another special involving a fighter from the 1990s, as Ike Ibeabuchi, rescued from the temporal scrap heap just before committing the crimes that got him sent to prison, confuses the holy hell out of the jail guards who think they’ve got him safely behind bars and instead, having not aged a day thanks to our time machine, goes toe-to-toe with Tyson Fury.

The first matchup, the heavyweight explosion, gives Ibeabuchi a bigger opponent than he ever comfortably handled in his time; Tyson Fury is a monstrous beast who will enjoy a significant size and reach advantage. Ibeabuchi is going to be in for one hell of a challenge as he tries to deliver leather on to the target in such a way as to effectively try and score the stoppage or take the decision.

Meanwhile, the main event is a question of whether the highly-touted Thurman, title belt in hand, has what it takes to step in from a man who did the bulk of his fistic campaigning in a time when the welterweight division was not considered the wide-open but questionably deep weight class it is in the immediate afteremath of the Pacquiao-Mayweather era.

Can One Time show the world he’s ready? Or will Quartey strike a blow for the glory days?

Ibeabuchi, nuttier than squirrel crap and mad as a hatter, got himself put in a time machine before he had a chance to commit (depending on whether you take his Alford plea as gospel, this is “allegedly”, but the evidence was there) the crimes that sent him to prison. He was on his “President” game 17 years later, except he’d stepped it up, calling himself “King of the Future”, and he promised a fight that was going to be less reminiscent of his battle with Chris Byrd and more along the lines of his tilt with David Tua.

Fury, for his part, had other ideas, most of them involving the height and reach advantages that had given Wladimir Kiltschko fits when it took the big champion’s jab-and-grab game out of the equation. Fury is 6’9” tall (to Klitschko’s 6’6”) and has an 85-inch reach (to Klitschko’s 81). So would a souped-up version of the ultimate outside boxer be able to hold off the shorter (6’2”, 76-inch reach) Ibeabuchi?

Ibeabuchi wasn’t kidding when he said he was going to swarm, and he went full ’87 Tyson (Mike, not Fury) on the bigger man, dispensing entirely with any attempt to jab on the way in to just go to town. He’d raise his hands as if to punch, freeze Fury, then rush the gap before he found himself caught in the nine-inch no man’s land that brought to mind memories of something like Thomas Hearns and Roberto Duran.

For the first round, it was successful, Ibeabuchi viciously digging to the long, lean body of Fury. Teddy Atlas once said of fighting taller fighters that “they’re like skyscrapers, so you gotta get in there and break a few windows.” Ibeabuchi’s punches were somewhere between throwing rocks at windows…and having a skyscraper in the path of a Sharknado.

Fury was able to keep Ibeabuchi on the outside as the fight settled down and his corner figured out what was going on, but just because he ate more shots coming in did not stop Ibeabuchi from doing so. Fury, as good as he was when he actually moved his hands, simply didn’t do it enough, and that gave the Nigerian that many more chances to do damage.

Fury didn’t have a listless Wladimir Klitschko this time. He had a pissed-off Ike Ibeabuchi, and his body felt the effects.

Ibeabuchi continued to look for his opening, and he found it a minute and 30 into the round; he uncorked one hellacious left hook that caught Fury right on the coconut, and followed it up with a right uppercut that aimed to shatter the jaw. Fury staggered back, and Ibeabuchi poured on the assault, smashing fist into face and completely short-circuiting all attempts by the bigger man to gain control of range. This was Ibeabuchi’s fight, and Fury, every time he got popped to the body, continued to weaken.

After three more one-sided rounds, referee Jack Reiss had seen enough. When Ibeabuchi first knocked Fury down with an uppercut, then followed that uppercut with about twelve unanswered straight lefts and rights as Fury was out on his feet in the corner, Reiss stepped in and stopped the fight. Fury protested, but the consensus view was that it was the right call to save a man from himself.

Keith Thurman is supposed to be the Next Big Thing in the welterweight division, but he so far has not been challenged to any meaningful degree. Wins over the likes of Diego Chaves and Jesus Soto Karass establish that he can out-punch guys willing to stand directly in front of him, but his recent struggles in making fights with Robert Guerrero and Luis Collazo more difficult than they had any right to be left serious questions about whether Thurman is a serious contender or whether the Temporal Commission was signing off on a slaughter and one of the biggest mismatches in the history of this San Dimas venue.

One thing was for sure; Quartey came to play, having arrived via time machine from the height of his powers, a harrowing three-round beatdown of Vince Phillips; this was no shot fighter he’d just cracked either, because Phillips would move down to 140 and capture a world title he defended three times, a title he needed to beat a Hall of Famer in Kostya Tszyu to grab.

Thurman came forward in his plodding, “more basic than basic” (to steal a line from Paul Magno) style, throwing rights to the body and lead left uppercuts so slowly and with such an obvious cock of the hand to set them up that fighting Thurman was and is a bit like playing Mike Tyson’s Punch-Out, waiting for his tell before dodging and countering.

With so little chance of beating the much faster-handed Quartey to the punch, Thurman also lacked a weapon by which he could keep the fight honest. His jab is cursory; his movement more choreography of the dance floor than improvisation in a boxing ring.

Which is to say that he’s like one of those guys at the karate dojo who moves up the belt ranks not because he ever wins a sparring match; he may go 0-100 in such contests while crowing about what a badass he is. Nay, he’s the guy who completes the kata sequences, demonstrates them to the sensei, and claims the next-highest-colored belt even though he can’t fight.

Quartey took to the offensive in the roughly 20 seconds it took to figure this out. What resulted was Drago-Creed rather than the first Sugar Ray Leonard-Roberto Duran fight.

Ever easy to hit and getting easier as the damage rapidly accumulated and the swelling, almost Gatti-like in its severity, began to form around Thurman’s eyes, things only got worse. Quartey was landing at will; Thurman couldn’t find him. A guy who can do the drills in the gym just fine forgets that knowledge quickly enough, and in a combat situation, Thurman was now statue-like. And a statue in front of a power puncher?

Quartey teed off. He was beating up a heavy bag at this point, and he gave angles, bull rushed, leapt in with flying right hands, and opened a cut over the left eye of Thurman that left commentators starting to wonder if we were going to witness a murder.

As the third round began and Thurman remained a Weekend at Bernie’s version of his titlist self, referee Kenny Bayless finally had to do something, and only twenty seconds into the third round, he stopped the fight. This was a joke. Thurman may inhabit the post-Mayweather wasteland and hold a piece of the title, but against a guy from a much better welterweight era, the era of Oscar and Tito and Sugar Shane and Sweet Pea and the Ghanaian standing in front of him this day? How the division has fallen.

Super middleweights take center stage in this little one-ring circus, as Andre Ward makes his Historical Fight Night debut against the version of Sugar Ray Leonard who fought Donny Lalonde in the main event. Will the king of Super Six take on a man who may have been a legend but was certainly way past his prime and come out the other side with a victory? Or does age and guile carry the day even 21 pounds above an ideal weight?

Your co-feature is a fun second-tier-guys scrap between Lucian Bute and Yaqui Lopez at light heavyweight. They don’t all have to be legends, folks.

That’s next Saturday, June 25, right here on Historical Fight Night. Thanks for reading!