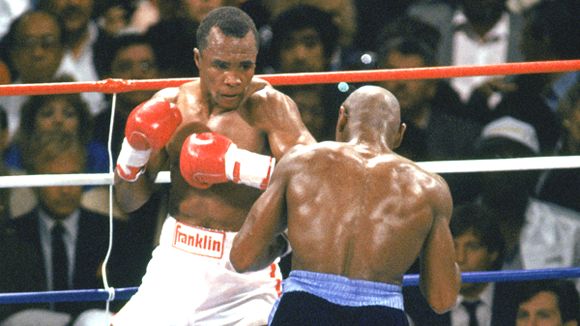 Sugar Ray Leonard is a tale of two fighters in his career. As a young man fighting at welterweight, his hand speed, power for his size, and ability to use the ring with his footwork was second to none.

The later, older Sugar Ray, however, had lost those gifts, and much like other slick boxers, once it starts to go, it goes big time. Still, that older Leonard managed to win a sham of a fight to add two weight classes to his “multi-division champion” boasting, when he came off the floor to beat Donny Lalonde not only for Lalonde’s light heavyweight championship, but for the newly-created super middleweight division at 168, a class invented out of thin air just to get Sugar Ray a belt.

Years later, the 168-pound division would come into its own and become, for a brief and glorious flirtation with the spotlight, the best division in boxing, thanks in substantial part to Showtime’s Super Six tournament. Nobody epitomized that best-of-days division more than Andre Ward, and it is he who stands against Leonard on this night at the fights. We grabbed him from the Arthur Abraham fight, a display of technical mastery unequaled for one man’s lumberjack-like ability to break down another.

Your co-feature? We’ve got light heavyweights, but this ain’t exactly Bob Foster and Ezzard Charles. Instead, we’ve got guys just good enough not to be good, one guy who was a paper champion, the other guy who had four cracks at the title and just never summited the mountain. Lucian Bute, longtime IBF 168-pound king, takes on Yaqui Lopez, and just for fun, we’re doing this under Here’s To The Losers rules; Lopez comes in from his loss to Matthew Saad Muhammad in the 1980 Fight of the Year, while Bute comes in from his loss to Jean Pascal.

The first thing you notice about these guys is the size advantage Lopez enjoys. He turned pro at light heavyweight and fought the first eight years of his 12-year career at 175. He then moved up to cruiserweight and managed to get a title shot, coming up second best against Carlos De Leon, but Lopez’s body looked like it could have borne the bulk of becoming a smaller heavyweight had he been inclined to reach that size.

Bute, on the other hand, is a super middleweight through and through, a guy who looked like he could stand to miss a meal in the Pascal fight, a guy who’s giving up quite a bit in terms of not just natural weight, but a three-inch reach advantage (75 to 72 inches for Lopez) to boot.

Can the bigger Lopez get the job done? Or is a guy who has actually held a world title belt going to prove too skilled for the stronger man?

Bute did have one early advantage; as a southpaw, he was able to confound Lopez and give angles that the bigger man wasn’t used to seeing. During the first round, attempts at aggression by Lopez were countered; angles given by Bute’s jab landed at will on the native of Stockton, California.

While the round did not feature any big, booming power shots, Bute did find a home for his straight left hand a couple of times; the round was decisive, and the fight was off to a flying start for the puffed-up super middleweight.

Lopez settled down into a bit more of a Fabian strategy as he studied Bute’s angles while focusing on defense. While he still got hit a fair bit, the more tactically-minded in the crowd and at ringside made note of the improved blocking and dodging on the punches that did not get through. While Lopez was not successful when he tried to engage back, and while he most certainly had one hell of a time getting his own right hand up and over on Bute even with the longer reach, the fight settled down and for Bute, it was going to become much more important to build a lead on the scorecards or to get the early KO—that latter no mean feat against a man who took Matthew Saad Muhammad into the late rounds.

Lopez finally started landing with a bit more consistency after going down 30-27 on all three judges’ cards.The right hand found a home, and it made Bute gun shy about trying to open up and throw big power shots; the early KO was off the table. For the first time, Bute was in trouble, and he rotated onto his back foot, presenting his shoulder but keeping his head well back.

Lopez sought the opportunity, but efforts to put Le Tombeur down went for naught; all Lopez could do was pin Bute to the ropes.

Lopez came in with far more aggressive intentions, looking to follow up on his success in the previous round…and it was here that the constant problem when an orthodox fighter fights a southpaw reared its ugly head.

Lopez lunged forward with a right hand, but he misjudged both the distance and the straight left coming back at him. Neither Lopez’s punch nor Bute’s landed; what did land was the forehead of Lopez directly over the left eye of Bute, which opened up a cut that bled less like a boxing cut and more like the Black Knight in Monty Python and the Holy Grail.

Referee Carlos Padilla had no choice but to stop it, and when the fight went to the judges’ scorecards, it was a unanimous technical decision, 48-47 on all three cards, for your winner, saved by his own bleeding face…

For Ray Leonard late in his career, it was a constant battle between his declining hand speed and reflexes, the first things to go in a fighter, and the overwhelming volume of natural talent that he had displayed at welterweight and when he first moved up to middleweight. Donny Lalonde was the penultimate victory of Leonard’s career; he went 1-2-1 in his last four fights, the lone triumph the wretched “Uno Mas” rubber match with Roberto Duran.

Meanwhile, Andre Ward is put into the time machine here from a domination of Arthur Abraham so thorough and decisive that one wonders if anyone, especially a 32-year-old Leonard, could have stood a chance against him.

Ward enjoys a two-inch height advantage here, but the reach edge goes to Leonard (74 to 71). All things are relatively even here, so let’s get the show started:

Floyd Mayweather may be the poster boy for the shoulder-back rolling defensive style, but Ward, on his best night, may be even better at it than even the undefeated longtime champion.

Ray Leonard discovered this the hard way, trying to no avail to get his jab onto the target and finding nothing but an eternity of space with nothing at the end of the road once his fist got where he’d aimed it. Ever elusive, Ward dodged and countered, peppering Leonard with jabs of his own, and the faster man was clearly Ward on this night.

It led some in attendance to question just how legitimate was Lalonde in that time machine fight 30 years ago. Considering that Leonard effectively ended Lalonde’s career (an abortive comeback at cruiserweight ran face-first into Bobby Czyz at the championship level; all his other post-Leonard fights were against hobos), it was a valid question to ask.

Sugar Ray Leonard didn’t want to answer that question, though. He came out with determination, trying to impose his will on Ward in the second round, dancing less and setting his feet to meet the attack more.

Ward, emboldened by the first round, rose to the bait, trying to step up his punch output and feeling as though he had a stationary target on which he could tee off. He got outwitted and outboxed, and we had ourselves an even fight.

Ward learned his lesson, due in no small part to his trainer Virgil Hunter spending the better part of sixty seconds screaming at him not to engage Sugar Ray on Ray’s own terms, and it was back to the slower but more effective pace that had been on display in Round 1.

This time, Ward fought much more defensively, which in the eyes of quite a few in the crowd turned it into a slog; the boo birds began their objections and rose to a crescendo as Ward continued to pile up the points.

When Leonard would jump in, Ward would duck and, rather than tie up Leonard himself, allow Sugar Ray’s own forward momentum to do his work for him. When Sugar Ray sat back and tried to bait Ward into the punching he’d engaged in during the second round, Ward all but dropped his hands and stare him down rather than be baited into the fool’s errand. By the end of the seventh round, Ward had assured himself no worse than a draw in the absence of a knockdown.

Ward was also in exceptional physical condition for this fight. He took his training seriously; Leonard, it was speculated, was a little starstruck by his own legacy thirty years forward in a time machine. When you know the guy in front of you is a legend, you prepare to beat a legend. When the guy in front of you is debated in his own time, maybe you relax a little.

In some sense, it was the first Duran fight, his only pro loss at the time of the Lalonde contest, all over again, and seven rounds of getting mainly smacked around and run ragged by his own efforts to mount an attack had taken a toll.

Ward tightened the noose around Ray’s neck. It was merely a question of the final bell.

And Ward, knowing full well he was up an undisputed seven rounds to one after eight, had interest neither in letting his foot off the throat of his opponent or risking getting cracked with a shot just to try and put an exclamation point on the fight.

So he outboxed, outfought, outpointed, and just generally beat the snot out of Sugar Ray for four more rounds. When the final bell sounded, two judges had it 119-109; the last had it 117-111 (to some consternation on press row wondering what fight he’d watched), all for your winner, by unanimous decision…

Your co-feature? A seething Terry Norris is out for revenge after being disqualified against Winky Wright in their first fight. That result had a bit of the kissing-your-sister sort of dissatisfaction attached to it in the eyes of the audience. One way or another, we’ll get a more decisive result next time.

Stay tuned here; we’re moving to a new site host on July 9th, so next week’s episode will be the last on The Boxing Tribune after a 13-month run. I’m putting Historical Fight Night under its own banner as the flagship of a classic what-if sports site that will be rounding into form over the summer and fall this year, so stay tuned, and thanks for reading!