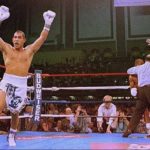 Usually in the business of boxing if a fight is big enough, it’ll happen no matter what it takes to get it. That means there might be dodgy decisions, questionable call outs and some promotional finagling to make sure the big one goes off without a hitch. The only thing that can stop that momentum is a devastating loss, especially in a fight that almost everybody thought was a … END_OF_DOCUMENT_TOKEN_TO_BE_REPLACED 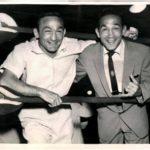 By Ted Sares A pier six mind-set involving an inclination to engage in brutal street-like brawls was a part of the old-school mix. The Basilio-DeMarco wars were the sin quo non of Old School, but for a pure, visual definition, the best I can do is recommend  the Monroe Brooks-Bruce Curry fight in 1978 in which the fighters fought with both skill and savagery and let it all … END_OF_DOCUMENT_TOKEN_TO_BE_REPLACED 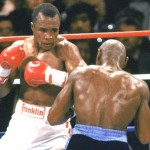 by Fox Doucette Sugar Ray Leonard is a tale of two fighters in his career. As a young man fighting at welterweight, his hand speed, power for his size, and ability to use the ring with his footwork was second to none. The later, older Sugar Ray, however, had lost those gifts, and much like other slick boxers, once it starts to go, it goes big time. Still, that older Leonard … END_OF_DOCUMENT_TOKEN_TO_BE_REPLACED 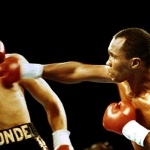 by Fox Doucette Sugar Ray Leonard has an interesting history on this show. He took a split decision from Oscar De La Hoya on July 3 of last year, then he beat Floyd Mayweather, also by split decision, on September 11. But those were guys who could match him shot for shot style-wise. So what happens when we throw him in against Manny Pacquiao? Does it become like the first … END_OF_DOCUMENT_TOKEN_TO_BE_REPLACED 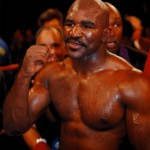 by Fox Doucette With the 45th anniversary of Ali-Frazier I coming right around the corner on March 8, the Temporal Commission has sent the time machine to Madison Square Garden to grab the victorious fighter for a go on Historical Fight Night. Frazier's one of the all-time hard-luck kids on this show; back during the Excellent Adventure, he couldn't get out of the 70s group … END_OF_DOCUMENT_TOKEN_TO_BE_REPLACED