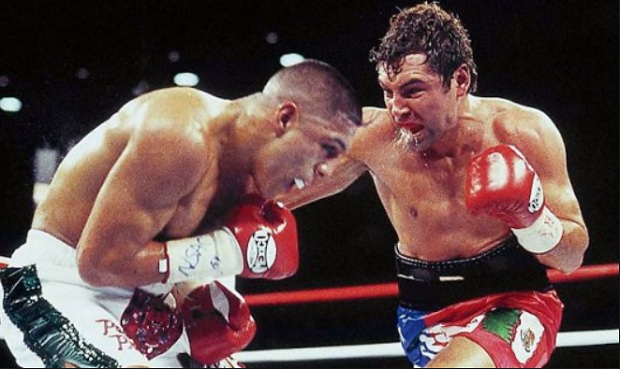 We’re breaking all the rules in this week’s edition of Historical Fight Night. Unlike most fights, which exist in vacuums, involve mind-wipes of the participants so they have no memory of what took place in what is to them the future, and otherwise work from clean slates, this time we’re doing things a little different.

See, this is the second fight between Oscar De La Hoya and Roberto Duran, the second of a planned trilogy between the two men, one each at light, welter, and middleweight. Of course we have to grab three different versions of the guys in question; we can’t just put them in at lightweight and then put 12 pounds on them apiece for the two fights thereafter. It doesn’t work that way.

But what we will do is grab them from their own futures and our past, at their very best when fighting at each weight…and then show them film of their fights here in this trilogy so that they have the same sense of progression as the audience.

And based on that, Oscar just watched himself get knocked out in three rounds in his first contest with Duran. Except this time, we’ve got the version of Oscar who absolutely pummeled Arturo Gatti. He’s bigger, he’s stronger, he’s coming off a big win…and watching himself get the snot beat out of him by the guy he’s about to face when we show him the film. He takes on the version of Duran who handed Sugar Ray Leonard his first loss in one of the great fights of his career.

Meanwhile, we just took Terry Norris and Winky Wright up to the Place Beyond Time to train for a rematch. There are places in the timestream where time can pass for a man while the world in a normal timeline stands still; that’s where Norris and Wright have been guests of the Temporal Commission. It’s nice there. Lots of excellent waterslides.

But long story short, Terry Norris wants revenge after he got disqualified in their first fight. He may yet get it.

But first, our sideshow attraction. Norris, when last we saw our players in this drama, was getting outboxed, resorted to dirty tactics, and got disqualified. This time around, will he dispense with the questionable stratagems and make with the pure punching power that he used to such great effect against so many of the opponents in his career as one of the better junior middleweights the sport has known?

And as for Wright, will he not try to fix what ain’t broke, or can we look forward to the man opening up a bit trying to goad his opponent into making the same mistakes?

Well, that was a question with an easy and quick answer. Watching film from the first fight during his tenure in the Place Beyond Time, Wright trained and refined his approach to a degree where he knew what Norris was going to throw before Terry did. There’s a generally regarded maxim in boxing that the guy who wins the first fight performs even better in a rematch, and while that’s not always true (Ward-Gatti II was a tour de force of Arturo beating the snot out of Micky after Ward had won their first fight by majority decision and indeed nearly by ninth-round KO), it’s true often enough (go watch Corrales-Castillo II for an example of the maxim played straight.)

Which is to say that Norris was getting right well starched off the counter shot in that opening round.

Another round of more of the same led to a frustrated Norris looking very much as he had before he busted out the fouls in the first fight, but this time, the specter of disqualification looming in the back of his mind, Norris instead decided on more of a go-for-broke aggression as his order of battle.

It would be charitable to say that this approach was merely a bad idea, as plenty of bad ideas ultimately work. Letting the peasantry have a say in government seemed like a bad idea when the Magna Carta was signed, after all, but parliamentary democracy turned out OK.

Unfortunately, “try your hardest to hit a man in the head who keeps hitting you very hard first” is not parliamentary democracy.

After two rounds of getting beaten absolutely beyond-Thunderdome senseless, Norris went for broke, and he got it.

Broke, that is. His nose. By a straight right hand. Bled like a mosquito if you pinch off its means of escape when it bites you and hold it until it explodes.

The corner threw in the towel when they saw it, because really, if someone looks like they’ve been shot in the face, and they haven’t landed a meaningful punch in the entire fight, it’s probably not their day.

We’ve got a guy coming off a knockout of a punching bag (let’s face it, Gatti was the kind of guy who, if you missed him, it was like missing a heavy bag in the gym) against a guy coming off a close but generally regarded as correct unanimous decision over one of the great welterweights ever to lace up the gloves, a boxing exhibition where Duran simply outfoxed and outboxed Sugar Ray Leonard all over the shop.

Nobody was surprised when Duran kicked Oscar’s ass at 135; will things be different at 147?

Well, for starters, Oscar was a lot more willing to mix it up inside than perhaps common sense ought to have dictated was a good idea. He’d tried to fight the range war in the lightweight fight, taking a page from Tommy Hearns’s book, but Oscar De La Hoya is not Tommy Hearns.

As it turns out, he ain’t Sugar Ray Leonard, either. Duran, happy to have the fight taken to him, completely controlled it on the inside, knocking Oscar around like it was a sparring match.

After one, the timbre of this fight was clear, and some began to wonder if perhaps Duran didn’t just have Oscar’s number.

Oscar held his own a bit better in rounds two and three; put simply, Duran was nowhere near the fighter at 147 and above that he’d ever been at 135, and Oscar, himself best as a welterweight, enjoyed the best nexus of size and power at that weight. He’d begun to force Duran to respect him, something he wasn’t able to do in the lightweight fight, and it made this fight far more of a back-and-forth affair.

What’s more, Duran didn’t have the raw power to simply blast Oscar out of there when the Golden Boy made a mistake. Sure, he could back De La Hoya off him, but he couldn’t impose his will.

Which all made this the more interesting, since with Duran clearly the better fighter but Oscar emboldened to fight his own best possible fight, the judges were confounded. There wasn’t much in the way of strategy afoot here; Oscar wasn’t going to give up the inside, and Roberto wasn’t long enough in the arms to take the outside. Instead, the two guys just winged shots at each other, each trying to break down his foe, neither willing to concede the slightest psychological or physical edge.

In point of fact, it was turning into a brawl, and not just any brawl, exactly the sort of slugfest where the lack of a decisive result was ironically turning it into a Fight of the Year sort of fight.

But one thing was in evidence throughout. Fighting on the inside led to Oscar eating a lot more shots than he ever did in his wins during his actual career, and the veneer finally peeled off as the fight entered its final third.

Oscar was throwing too many punches for his stamina level; stamina, bolstered by having been time-machined out of a close 15-rounder, was no such impediment for Duran.

The pitch shifted. Oscar buckled. Roberto pounced. The referee, Steve Smoger, hesitated, but as the clap and then the bell came, there would be no stoppage in the ninth.

Instead, it was in the tenth. Roberto Duran came out slugging, sensing that his prey had expended the last of his reserves just staying alive, and acting correctly upon that sense.

Oscar ate a left. He ate a right. He choked on an uppercut. He was out on his feet, getting his face tenderized by punch after punch…and 29 seconds of that was enough to convince Smoger not to wait around this time.

The referee stops the contest at 29 seconds of the tenth round. Your winner, by technical knockout, and awaiting a chance to go for the sweep at 160 pounds in a few weeks…

We’re taking next week, July 9th, off, and coming back on the 16th with a new host for this show (stay tuned to Facebook and Twitter for updated links). This will be the last edition here on The Boxing Tribune; I’m taking it under the banner of my Mystery Ship Studios imprint.

But behind-the-scenes stuff aside, we’ve got a doozy of an opener for you folks. Floyd Mayweather, at 130 pounds, takes on Alexis Arguello in the main event. The co-feature? Aaron Pryor, who hasn’t been seen around here since he beat the living crap out of Kostya Tszyu almost a year ago, takes his cracks at Ricky Hatton.

It’ll be a great debut as the flagship of a new sports-history site, but we’ll roll out the details once we get there. For now, thanks so much for reading!