In 2017, Anthony Joshua went from exciting young heavyweight titlist to bonafide star with his thrilling eleven-round TKO victory over former champ and future Hall of Famer Wladimir Klitschko. And the 28-year-old may finish off the best year of his career thus far with official acknowledgement of his ascension to superstar status by winning the BBC’s coveted Sports Personality of the Year award.

According to Boxing bookmakers from Betway Insider, the IBF/WBA world champ is the odds-on favorite to win the prestigious prize, which is determined by public vote, at the official awards ceremony on December 17 in Liverpool. A win in such a high-profile mainstream sports event could cement Joshua’s status as a true crossover star, to be regarded alongside the very best the UK and the world, for that matter, has to offer.

If Joshua does walk away with the SPOTY award he will be just the fifth boxer to earn that designation since the award began to be handed out annually in 1954. Past boxing winners have been Henry Cooper (twice—1967, 1970), Barry McGuigan (1985), Lennox Lewis (1999), and Joe Calzaghe (2007). It will also be a bit of a monumental achievement since modern boxing is currently behind pay-per-view paywalls and not easily accessible to the casual viewer. 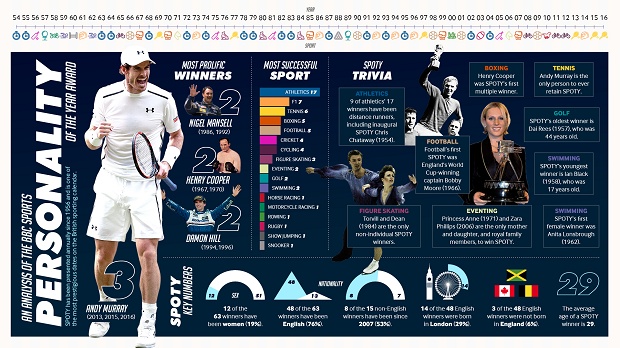 Standing between Joshua and his SPOTY award is Carlos Takam, who will be facing Joshua on October 28 at Principality Stadium in Cardiff, Wales, after original challenger Kubrat Pulev pulled out of the fight due to injury. Although the fast-rising Brit is a huge 50/1 betting favorite in the upcoming bout, Takam is a live body and fairly dangerous as a potentially overlooked replacement.

Some feel, however, that, win or lose, Joshua’s star power was so firmly established in his outstanding performance against Klitschko—as one-half of what is being called the best heavyweight title fight in the last 15 years—that he’ll take home the SPOTY regardless of what happens against Takam

“AJ is a very solid shot to be crowned this year’s BBC Sports Personality of the Year, and it looks unlikely that Takam will put a spanner in the works,” said Betway’s Alan Alger. “Even if he springs a surprise, it’s likely AJ would still remain favourite…The public won’t be forgetting his monumental victory over Wladimir Klitschko too quickly, and it’s that bout that cemented his place as favourite.”

Stardom within the walled-off boxing world is not, in and of itself, an indication of true stardom. The REAL superstars of the sport have the ability to transcend sport, itself, and capture the imagination of a crossover mainstream populace. Fighters like Floyd Mayweather and Manny Pacquiao have been able to accomplish this in recent years, but as boxing finds itself more and more of a niche sport, the ability to generate crossover appeal has diminished greatly. So, it says a whole lot about Joshua and his true potential that so many feel he will make the gigantic leap from boxing star to mainstream superstar.

But even after a win over Takam and a capturing of the BBC’s SPOTY, Joshua will have to keep pushing forward if he wants to remain relevant. Boxers—unlike the Olympians who have won many of the SPOTY awards in the past– don’t get to retire and rest on their laurels. A fighter has to keep fighting and keep winning to cement his place in the mainstream sporting world. And, as we all know, a fighter’s career can be ended with one well-placed punch at any time.