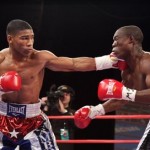 Professional excellence tempered with personal disappointment is nothing new for 2004 Olympic Gold Medalist, Yuriorkis Gamboa. After all, Gamboa is the same fighter who, despite national hero status in his native Cuba, had to sell his gold medal in order to pay for his daughter's first birthday party. Even when defecting in December of 2006, alongside teammates and fellow … END_OF_DOCUMENT_TOKEN_TO_BE_REPLACED