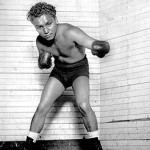 Brought to the port cities along the Gulf of Mexico by British and American sailors in the early parts of the 20th century, Boxing quickly became one of Mexico's sporting obsessions and an integral part of Mexican culture. The first in a multi-part series on Mexico's Boxing Legends, The Boxing Tribune chronicles the life and career of Hall of Famer, Alberto "Baby" Arizmendi. … END_OF_DOCUMENT_TOKEN_TO_BE_REPLACED