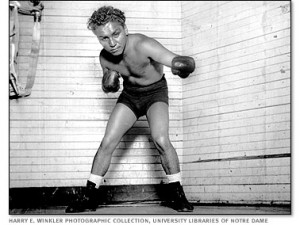 Brought to the port cities along the Gulf of Mexico by British and American sailors in the early parts of the 20th century, Boxing quickly became one of Mexico’s sporting obsessions and an integral part of Mexican culture. The first in a multi-part series on Mexico’s Boxing Legends, The Boxing Tribune chronicles the life and career of Hall of Famer, Alberto “Baby” Arizmendi.

What can be said about a fighter so tough that he beat the great Henry Armstrong, winning almost every round — with a broken wrist? Alberto “Baby” Arizmendi became Mexico’s first boxing star and paved the way for generations of warriors from the Aztec Nation.

Born in Tamaulipas, Mexico in 1914, Arizmendi was a sickly child, suffering from a mild case of polio. Too frail to work in the ports along the Gulf of Mexico, a doctor recommended that Arizmendi’s parents take their 11-year-old son to a local boxing gym for therapy.

Arizmendi excelled and, two years later, he made his professional debut in Laredo, Texas at the age of 13, becoming the youngest professional fighter to ever step in the ring.

Despite efforts to get Paul back in the ring for a title bout, the rematch was never made. Instead, the California Athletic Commission granted Arizmendi a shot at their version of the world featherweight title, held by Newsboy Brown.

The 1932 Brown-Arizmendi title bout, which was actually the rubber match in a three fight series started earlier in the year, was dominated by the Mexican in front of a packed Olympic Auditorium in Los Angeles.

Arizmendi would defend his title four times before dropping the belt via decision to NBA featherweight champ, Freddie Miller, in a 1933 unification. After a failed attempt to exact revenge on Miller four months later, Arizmendi moved on to beat veterans Eddie Shea and Al Roth, among others, and then capture the NYSAC (New York State Athletic Commission) world featherweight title in a New York fight against “The Bronx Spider” Mike Belloise in 1934.

Next, in the signature victory of his career, Arizmendi dominated and decisioned Henry Armstrong at the Estadio Nacional in Mexico City on November 4, 1934. Fighting with a broken wrist, suffered in the second round, “Baby” dominated the bout in what the press called “one of the most courageous exhibitions in Mexican ring history.” Two months later, Arizmendi would beat Armstrong again for the California-Mexico world featherweight title.

All told, Armstrong and Arizmendi would fight five times, with Armstrong taking the 3-2 edge, the final and rubber match contested at welterweight.

Over the last five years of his career, the fan favorite Mexican warrior would become a fixture on the California fight circuit, engaging in thrilling battles against the likes of Lou Ambers, Chalky Wright, and Sammy Angott, and retiring in 1942 with a record of 81-27-13 (17 KOs). Arizmendi would take pride in the fact that, although stopped four times in his career, he always finished on his feet and never took a full 10-count.

After retiring, he enlisted in the US Navy, serving in the Pacific during World War II. Following the war, Arizmendi opened a restaurant in the Echo Park District of Los Angeles. The groundbreaking Mexican pugilist would pass away from diabetes-related complications in 1963, at the age of 48.

Arizmendi was inducted, posthumously, into the International Boxing Hall of Fame in 2004.

The Boxing Tribune salutes the career and accomplishments of Alberto “Baby” Arizmendi, the first of a long line of Mexican warriors and a true pioneer of prize fighting.