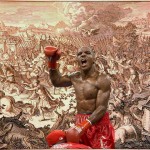 In 331 B.C., a 25-year-old Alexander the Great and his Macedonian army, while marching toward conflict with Darius III, King of Persia, take Egypt. The new Pharaoh, Alexander, establishes the city of Alexandria. In 2012, a 25-year-old Devon Alexander has his first bout under the banner of Golden Boy Promotions. Alexander, much like Paulie Malignaggi before him, finds himself … END_OF_DOCUMENT_TOKEN_TO_BE_REPLACED