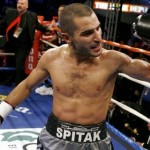 Anselmo Moreno (31-1-1, 11KOs) will face Vic Darchinyan (37-3-1, 27KOs) on Saturday, December 3rd for the WBA bantamweight title. Moreno is ranked 1st in the world among bantamweights.  The one loss and one draw he has on record came very early in his career in 2002.  His last seven bouts were won either by TKO or split decision. Darchinyan is ranked 6th in the world … END_OF_DOCUMENT_TOKEN_TO_BE_REPLACED