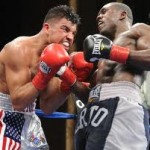 Victor Conte, the strength and conditioning coach for two-time welterweight titlist, Andre Berto, informed BoxingScene.com this morning of the severity of Andre Berto’s injury. “Andre ruptured the same left bicep that he had surgery on previously," Conte stated. “Andre is having surgery and I was told that the fight is definitely off.” Berto previously ruptured his left … END_OF_DOCUMENT_TOKEN_TO_BE_REPLACED