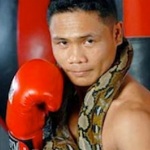 Quick, what fighter has a 39-1-4 record, has not lost in 12 years, and has won world titles in two different divisions. You say Paul Spadafora? Nope. Hint: After Manny Pacquiao, he may be the most popular Filipino boxer, but like the legendary Eder Jofre (who was equally popular in Brazil), he just might be the best fighter who toils under the radar. If you said Donnie “Aha” … END_OF_DOCUMENT_TOKEN_TO_BE_REPLACED