By Geoff Poundes Ulsterman Carl Frampton, now 12-0, 8 KO’s, despatched his Scottish challenger Kris Hughes this evening after seven rounds of one-sided action in which the self-styled “Jackal” confirmed his early promise as Irish boxing’s next big thing. Frampton’s Commonwealth super-bantamweight crown remains firmly on the 24-year-old’s head, but will surely be … END_OF_DOCUMENT_TOKEN_TO_BE_REPLACED 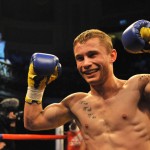 One of Ireland’s finest prospects puts his Commonwealth super-bantamweight title on the line Saturday night at the York Hall in Bethnal Green, London’s most enduring fight venue. Carl Frampton is based in Belfast, but in a short career he’s not been shy of taking his show on the road. That willingness to travel is entirely based on an unshakeable belief in his own ability, … END_OF_DOCUMENT_TOKEN_TO_BE_REPLACED