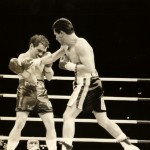 It was the largest live attendance in boxing history, and the only time in history a boxing ring was surrounded by a moat and barbed wire. It was February 20th, 1993, and more than 130,000 fans came out to Don King’s “Grand Slam of Boxing” to watch their hero, and pound for pound boxing great, Julio Cesar Chavez-- who had built his stamina via jump rope to nearly super human … END_OF_DOCUMENT_TOKEN_TO_BE_REPLACED