It was the largest live attendance in boxing history, and the only time in history a boxing ring was surrounded by a moat and barbed wire. It was February 20th, 1993, and more than 130,000 fans came out to Don King’s “Grand Slam of Boxing” to watch their hero, and pound for pound boxing great, Julio Cesar Chavez– who had built his stamina via jump rope to nearly super human standards–  lay a merciless beating on Greg Haugen at Estadio Azteca (Azteca Stadium). 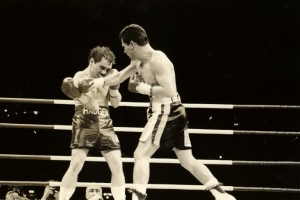 Azteca Stadium is massive. Originally built for the 1968 Mexico City Olympic soccer matches, it has hosted multiple high profile soccer events all of which turned out very large attendances. The moat and barbed wire are part of the field, installed to “control” unruly fans and keep the players safe. On this night though, one couldn’t help but wonder if the barrier aided in fighter and official safety, or simply to keep the challenger from running away once the fight started. Then again, escaping the arena may have seemed an easier challenge than escaping the wrath of Chavez, who was not only defending his WBC world light welterweight championship but fighting for Mexico and all its citizens.

Haugen shared some pretty nasty and insulting comments leading up to the fight, so simply showing up for the event in Mexico City showed the guy had balls. Haugen’s animosity for Chavez went back years prior to this bout, but statements about Chavez having built his impressive record fighting “Tijuana taxi drivers” had Chavez’s blood boiling. As far as fighting a Mexican hero on his home turf, Greg had no worries because as he put it, “there aren’t 130,000 Mexicans who can afford tickets”. If he was simply trying to promote the fight, he was doing a good job of it. If he was trying to get under the champion’s skin…he was doing an even better job of that. All that was left now was to see if Haugen could do what 84 prior men had failed to do: beat Chavez.

To be fair, Haugen wasn’t a bad fighter. Starting out as a brawler in tough man contests (where he’s rumored to be undefeated), he had held the IBF lightweight title as well as the WBO light welterweight title prior to this bout, but in facing Chavez he was facing a different class of fighter than he had ever seen. Vinny Paz and Hector Camacho were good fighters, but as Haugen was about to find out, they were a world away from the man across the ring from him that night.

Coming to the ring, Haugen looked relaxed and even a little smug. Chavez looked angry, and after the introductions and referee instructions, refused to touch gloves with Haugen and returned to his corner nearly salivating (as were the fans) as he was waiting for the opening bell. Once referee Joe Cortez was successful in getting both participants to touch up, it started.

It was seconds before Chavez had Haugen on the canvas. After sending him back on his heels with a right hand, another right hand dropped him. Haugen got up, but as the round moved on the disparity in skill level of the two fighters was more than obvious. Chavez had backed off just enough to let Greg survive, and took the beating into the next round.

By the middle of the second, Haugen was already marked up and swelling at a pretty good rate. He was being shaken by every right hand Chavez landed and every thudding left hook that he took to his rib cage. At this point it was clear that Julio was carrying him, intent on punishing him for his pre-fight insults, and the fight wouldn’t end until Chavez decided it would.

Haugen was trying. He didn’t run or try to cover up. He moved forward when he could, he threw punches and even landed a few, but they had no steam on them and he just couldn’t keep Chavez away. As Ferdie Pacheco put it “he has no way to keep Julio Cesar Chavez off, except mercy on the part of Chavez, and he has none”. It was just about as one sided as a fight could be, Chavez stood in his corner between rounds and Haugen could barely stand during them.

Be it mercy or boredom, Chavez finally put an end to things in the fifth round. After dropping Haugen midway through the round and continuing his assault along the ropes, referee Joe Cortez called an end to the bout at the 2:06 mark, Chavez was now 85-0.

Both fighters gave each other due respect after the bout, Chavez telling Haugen “Now you know I don’t fight with taxi drivers” to which Haugen jokingly replied, “Well, they must have been tough taxi drivers”.