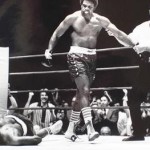 by Fox Doucette We should probably make 'Ste Coughlan of the Mythical Boxing forum an honorary member of the Temporal Commission at this point, because when he asked the what-if question that is our main event tonight, your columnist's instant reaction was "damn, why didn't I think of that?" So your main event tonight is Ron Lyle, in via time machine from the Earnie Shavers … END_OF_DOCUMENT_TOKEN_TO_BE_REPLACED 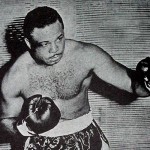 by Fox Doucette If Boxrec is to be believed, Archie Moore is the greatest fighter of all time on a pound-for-pound basis. It's not a bad choice; really, you could have your pick between Moore, Sugar Ray Robinson, Muhammad Ali...one thing that is in no doubt is that Archie Moore is one of the very best. This is also why Moore has not yet appeared on Historical Fight Night; the … END_OF_DOCUMENT_TOKEN_TO_BE_REPLACED 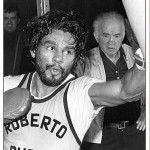 by Fox Doucette Tonight, on Historical Fight Night, we've got a matchup between a seemingly ageless 37-year-old Roberto Duran, who went through hell itself against Iran Barkley in the 1989 Fight of the Year en route to a contested split decision and the middleweight championship of the world, and Carlos Monzon, fresh off his beatdown and 12-round TKO of Nino Benvenuti in the … END_OF_DOCUMENT_TOKEN_TO_BE_REPLACED 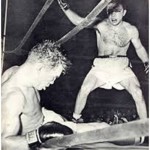 1. Diego Corrales vs. Jose Luis Castillo I (2005): Round 10. With his left eye almost totally closed and already down twice in the 10th, the late Chico Corrales miraculously climbed off the deck and battered Jose Luis Castillo into submission along the ropes to score one of the most dramatic come-from-behind TKOs in boxing history. As Castillo was moving in for the … END_OF_DOCUMENT_TOKEN_TO_BE_REPLACED 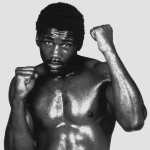 Boxing fans love a list. There is just something about boxing and lists that go together. Like cookies leading to the invent of chocolate chips or the bicycle leading to the car-- boxing stokes the flames of list makers. Whether it is a list of top contenders, Champions, or fights we’d like to see, or even fights we don’t want to see. We’ve all either written or read a boxing … END_OF_DOCUMENT_TOKEN_TO_BE_REPLACED