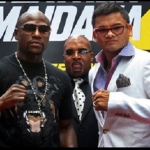 Paul Magno In their first fight, a jaded, disinterested Mayweather held his own against a supremely motivated and sharp Maidana. Then, at the mid-rounds mark, he stepped on the gas ever so slightly and cruised to a near shutout in the second half of the fight. We've already seen that Maidana at 100% couldn't beat a daydreaming Mayweather, it's doubtful that we'll see a … END_OF_DOCUMENT_TOKEN_TO_BE_REPLACED