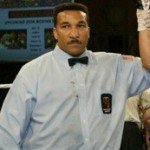 Veteran referee, Tony Weeks, has been pegged by WBO officials for the high profile, Manny Pacquiao-Juan Manuel Marquez assignment this Saturday. The Las Vegas resident is considered one of the sport's better officials and was the referee in Pacquiao's 2008 victory over Oscar De la Hoya as well as his unanimous decision win over Marco Antonio Barrera in 2007. Weeks has also … END_OF_DOCUMENT_TOKEN_TO_BE_REPLACED