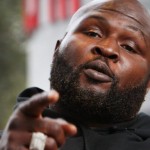 The lights have been dimming for James Toney for quite a while now; it’s a long time since he last shone as the great boxer, which he once was, perhaps as far back as his fight with Evander Holyfield way back in 2003. In the decade since the Holyfield fight, Toney’s nickname of ‘lights out’ has gained a sad irony as his life in and out of the ring has become progressively … END_OF_DOCUMENT_TOKEN_TO_BE_REPLACED