The lights have been dimming for James Toney for quite a while now; it’s a long time since he last shone as the great boxer, which he once was, perhaps as far back as his fight with Evander Holyfield way back in 2003. In the decade since the Holyfield fight, Toney’s nickname of ‘lights out’ has gained a sad irony as his life in and out of the ring has become progressively darker, as his skills and health have dimmed before our eyes, with almost every fight. Once a throwback to boxing’s ’good old days’ with his old school skills and willingness to meet anyone between the roped square, Toney has now become a throwback to all that was and is bad about boxing. 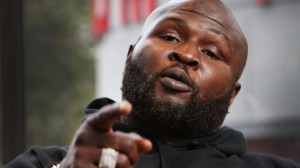 Toney now embodies the stereotype, used in old boxing films, such as ’The Setup’ and ’Requiem for a Heavyweight’ where a once mighty champion or contender is reduced to scuffling in small halls for small money, against men he would have once used as sparring partners, trying to ignore the ever-encroaching signs of age, and the increasing damage done to him by his profession.

James Toney hasn’t won a meaningful fight since his controversial 2008 decision win over Fres Quendo, when he was already showing clear signs of deterioration, both inside and outside the ring. Since the Quendo fight, Toney’s slide has become steeper and more disturbing. While the erosion of his ring skills has become ever more profound, the most disturbing aspect of Toney’s decline has been his increasingly garbled speech. What started with a hoarsening of his voice about a decade ago, and then developed into an increasingly erratic speech pattern over the ensuring years, has now accelerated to such an extent to render Toney almost incomprehensible.

When Toney made his appearance on Sky TV last week, in order to promote his participation in tomorrow’s (14 Nov) Heavyweight Prizefighter, it was hard not to feel moved to pity for this once immensely gifted athlete, who now seems unable to communicate cohesively. Toney’s speech is now beyond being simply garbled, it now resembles something akin to an out of control freight train coming off the tracks, with words and sentences twisting and crashing into each other, in a mass of verbal chaos.

To see a former great champion like Toney reduced to fighting, in what is basically closer to being a side show, than world championship boxing is sad enough, but the fact that he is doing so in such a decreased state of health and athletic ability is deeply worrying.

In truth, Toney has been brought into the Prizefighter fray in an effort to boost the format’s flagging appeal. Looking at the possible opponents that Toney will face in this particular Prizefighter line up, one might think at first that even a much-reduced Toney will be able to look after himself against this collection of fighters, none of whom would have been considered a decent match for him even 4 or 5 years ago. Yet if you take a look at Toney’s performance against Lucas Browne earlier this year, then you realize, the poor conditioning, the loss of speed and reflexes, the erosion of balance and motor skills, then you should see and understand. It is no longer simply a case of the level of his opposition, it is that Toney has reached the point where any opponent is a dangerous opponent, and every punch is now a punch too many.

One of Toney’s incomprehensible declarations since arriving in London for the Prizefighter tournament is that he is still the best heavyweight in the world. It says a lot about his present state, that Toney actually seems to believe this sadly deluded boast.

Toney’s situation is all the more depressing, coming at a time when the boxing world is dealing with the joint tragedies of Frankie Leal’s death and Magomed Abdusalamov’s severe injuries, after their recent fights. Boxing fans have once more been forced to look into the dark side of the sport. Funds have been set up and wise words have been uttered, and yet nothing has really changed if someone in Toney’s condition is allowed to carry on fighting.

Last week we saw Danny Williams and Oleg Maskaev struggle through 10 rounds against each other, in a fight whose only saving grace was that neither man seemed capable anymore of inflicting any significant damage upon the other.

Meanwhile, Roy Jones Jr., who once shared with Toney the accolade of being one of the world’s premier pound-for-pound fighters, now shares with Toney the slide into mediocrity and self-delusion, as he prepares to fight journeyman Bobby Gunn yet still talks of winning more world titles.

In a profession where sudden fatal or life changing injury can strike at any moment, it is to boxing’s shame that fighters like Toney, Jones, Williams, and Maskaev are able to continue allowing their bodies to be hit by leather bombs, long after nature has started shouting stop. Yet, these are simply the high profile fighters who have been reduced to these circumstances. How many unknown fighters are there allowing themselves to be pounded like aging meat, long after they should have found another profession. This is part of the nature of boxing, the sacrifice of the weak and aged, and the damaged.

Boxing is a brutal and dangerous activity; this is part of its appeal, to watch these men in physical situations that the normal man on the street could never withstand. This is not about wrapping fighters up in cotton wool or banning headshots. It is simply about drawing a line at the point where the brutality of boxing loses its special beauty, and becomes simple brutality. When it’s no longer the fit and strong risking injury or damage, but the already ring-worn and damaged, being allowed to risk further damage, or worse.

One wonders what will become of James Toney in the not too distant future, when the promoters have squeezed the last drops of light from him. Will he be somewhere in a darkened room all alone? Will he even know where he is by then?