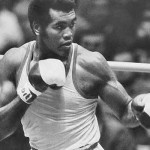 by Fox Doucette When last we left Cuban sensation Teofilo Stevenson, he'd just taken his third knockout loss, falling first to Earnie Shavers and George Foreman before Muhammad Ali stopped Stevenson, still only 23 years old, on February 20, 1976. Stevenson lost the eye of the tiger after that fight; he'd been in with world championship-caliber fighters, but never sniffing the … END_OF_DOCUMENT_TOKEN_TO_BE_REPLACED

by Fox Doucette Teofilo Stevenson was born in Puerto Padre, Cuba on March 29, 1952. He would go on to become one of only three boxers to win three Olympic gold medals (in 1972, '76, and '80) and might very well have won more had not the Cuban team boycotted the 1984 and 1988 Games in Los Angeles and Seoul. Stevenson is regarded as the greatest amateur boxer of all time by a … END_OF_DOCUMENT_TOKEN_TO_BE_REPLACED