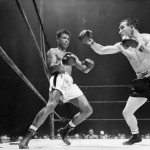 by Fox Doucette The oldest one in the book in boxing is “styles make fights”, so what happens when you take an old-school guy who lunged and leaped and generally had no concept of positioning if it meant delivering a power shot and put him in against one of the most fundamentally sound straight-up boxers of all time? We find out tonight with a middleweight contest, as Tony … END_OF_DOCUMENT_TOKEN_TO_BE_REPLACED