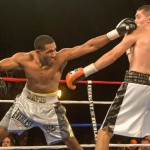 By Fox Doucette The fastest way to inspire a poor performance seems to be to say something nice about someone. Or so fans would be led to believe after all the glowing reviews of the 2011 Friday Night Fights season on ESPN2, where the matchmakers at the Worldwide Leader were rightly praised for putting on some tremendous fight cards, including the Fight of the Year between … END_OF_DOCUMENT_TOKEN_TO_BE_REPLACED