The fastest way to inspire a poor performance seems to be to say something nice about someone. Or so fans would be led to believe after all the glowing reviews of the 2011 Friday Night Fights season on ESPN2, where the matchmakers at the Worldwide Leader were rightly praised for putting on some tremendous fight cards, including the Fight of the Year between Pawel Wolak and Delvin Rodriguez along with Lamont Peterson’s win over Victor Cayo and a bunch of entertaining scraps involving guys who ought best to be known as “the usual suspects” by now (John Molina, Hank 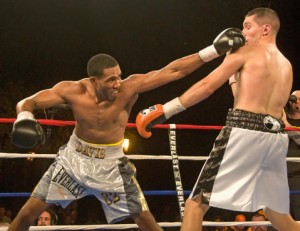 Which made the snoozer between Dyah Davis and Alfonso Lopez last week that much more disappointing. Even Teddy Atlas had an inkling from the first round onward that uh-oh, we’re going to have to work hard to keep the fans watching the commercials. Studio host Bernardo Osuna tried gamely to involve the social-media crowd to give the fans a reason to stay engaged, Joe Tessitore brought up the BCS national championship game (speaking of snoozers), and the fighters…well, let the record show that it was 64 seconds into the first round before Lopez even made a motion that could be charitably described as “throwing a punch”, a pace that held for all ten rounds of the contest.

The fact remains however that any fool could have seen that result coming. Davis and Lopez are not sluggers, they are not TV-friendly fighters, and they are not even knockout-artist counter punchers like a Floyd Mayweather (of course, Mayweather is on a level all his own, but the style works at all levels of the fight game.) Styles make fights, and when neither fighter has the temperament to press the action and force a faster pace, nine times out of ten you get a boring fight.

With all due respect to those who beat the drum for better technical quality in fighters, for defensive matchups and boxers rather than sluggers, I don’t want to see that on TV. I want to see 1987 Mike Tyson. I want to see 2002 Micky Ward and Arturo Gatti and 1974 George Foreman and guys like Pawel Wolak who step into the ring with defensive boxer-type fighters and force them into epic wars. I like Lucian Bute much more than I like Andre Ward because while Ward wears down his opponent over twelve rounds, Bute prefers to demolish his in four. I like David Lemieux and hope he works out the problems with his technique with his new trainer and gets back on the winning track beating the stuffing out of B-level middleweights (if anyone’s got the chops for a long career as a fringe guy fighting on ESPN while never winning a world title, David Lemieux fits the bill as well as anyone not from Siberia.)

This Friday, Teon Kennedy, who is well-known for losing his discipline under pressure from his opponents, will step into the ring. I’m praying to the boxing gods that Christopher Martin is able to land some shots early, because it’s the only hope we all have of getting something other than the Dyah Davis Experience again this week. If not, ESPN will be 0-for-2 trying to debut some new blood on its Friday night show, something that can’t augur well for the quality of future shows on the network. This could prove to be a real problem, since a show about up-and-coming fighters must naturally graduate its talent to big-time fight cards (Josesito Lopez made that leap last year, Hank Lundy and Ismayl Sillakh are making that leap in 2012, and Guillermo Rigondeaux, who came up on ESPN, is fighting for a world title in a month’s time.)

Yes, in the meantime we’re getting great scraps. On January 27th Provodnikov fights two-time knockout victim David Torres, ranked 132nd by Boxrec at junior welterweight. On that same fight card, Korean power puncher Ji-Hoon Kim takes on kill-or-be-killed Ghanian (18 KOs in his 20 wins and 1 KO loss in his two losses) Yakubu Amidu in a “check the parking lot, we’re gonna need some swing fighters” kind of fight night that is the early favorite for best night of boxing of the year. John Molina gets thrice-stopped Marvin Quintero in February. Kendall Holt and Tim Coleman have been announced to fight on March 16th in Cabazon, California in a guaranteed action-packed fight, since Holt delivered a KO of the Year candidate over Julio Diaz and Coleman got well and truly clobbered by Vernon Paris last year on FNF.

But eventually Molina’s going to be fighting on pay-per-view undercards for world titles. Holt can only bounce up and down between title fights and ESPN so many times before he loses his ability to be a championship-quality fighter–he’ll probably hang up the gloves when that happens. For every Guillermo Rigondeaux who takes the world by storm on Friday nights, there’s a Yordanis Despaigne getting exposed as a second-class fighter who is worth watching only when he has an interesting opponent (speaking of Despaigne, his head will be served up like a ball on a tee to a revenge-hungry, bloodlusted Edison Miranda on February 3rd.) And Demetrius Andrade…well, he’s Demetrius Andrade. Fun to watch against an appropriately inept, fragile opponent (Derek Ennis, February 10th) but otherwise crashingly dull.

ESPN’s talent scouts have to go back to the drawing board. On the bright side, there’s an Olympics coming up in London, which will surely produce a new crop of guys that will be turning pro and looking for someone to follow their early career arc. Find the guys who look good in their four rounders and hope that they pan out in the pros, so that fans can get a new stable of familiar faces to follow on the way up. Just no more matchups between low-action guys like Dyah Davis and Alfonso Lopez on television, please.

Fox Doucette covers Friday Night Fights, sometimes a bit too obsessively, for The Boxing Tribune. His weekly column, The Southpaw, appears on Thursdays. Fan mail, hate mail, and bragging about beating Mike Tyson’s Punch-Out in 1987 can be sent to beatcap@gmail.com.