Pound-for-Pound King, Manny Pacquiao added the title of Lineal Jr. Welterweight Champ to his growing collection of awards as he scored a dominant 2nd-Round blow-out of Ricky Hatton. 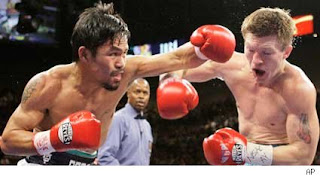 Hatton was down twice in the first round and then put down extremely hard in the second. The fight was waved off by referee Kenny Bayless at the 2:59 mark. Hatton remained seemingly unconscious on the canvas for several minutes afterwards before leaving the ring under his own power.

The win for Pacquiao, now 49-3-2 (37 Ko’s), puts him in line for possibly the biggest fight of his career against the returning Floyd Mayweather Jr. later in the year.