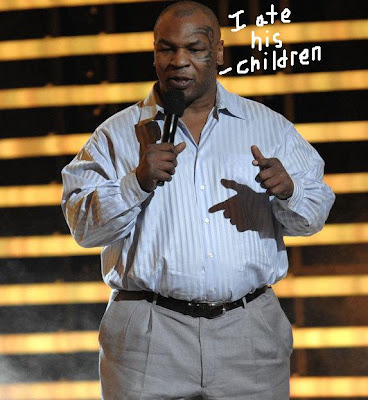 According to dirt-rag gossip site, Ianundercover.com, mega step-dad and star of The Fight Club, Brad Pitt, was nearly offed by enraged Heavyweight champ, Mike Tyson because of Pitt’s relationship with Tyson’s ex, Robin Givens. According to a pal of Tyson’s, the goofed-up ex-champ went as far as paying $20,000 to a hitman to eliminate Pitt. Tyson is also alleged to have bought a gun to try to do the job himself after backing out of the deal with the paid assasin.

“The champ wanted to kill Pitt because he refused to back off Robin. He called him and told him he’d have him knocked off if he didn’t back off. He did this several times,” said Richard Singer, a former friend of Tyson. He went on to say that Tyson hired a professional hitman to kill Pitt. “He paid him 20 grand upfront,” he said. “But he changed his mind and decided he’d to the job himself.”

Hmmmm…important story or slow news day? You be the judge.