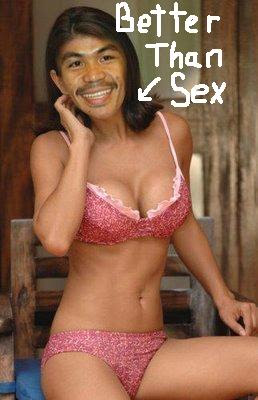 From the Thread: “How Would You Fight Pacquiao in a Streetfight?”

“I’d use my wrestling/bjj to take him down and go for a leg lock, armbar, or choke. I’m about the same size as him (5’7″, 159) and am quick too, so hopefully, I could avoid getting punched in a bad spot and could get my hands on him, it’s done after that, but, if I eat a punch, I’d probably be eating the pavement, lol”

“I will use combative form of Aikido if i will fight MP but if he is to fast for me, so i dont have the option I will get a machine gun and shoot him I doubt if he can avoid the bullets .”

“i would cover up my face and close the distance, then i would use my size advantage and try to wrestle him to the ground, and once there, i would put an arm lock on him and try to dislocate his weapons of mass destruction.

a lot easier said than done, of course, he would probably catch me with a devastating left straight to the solar plexus before i get a hold of him, and without padded gloves to lessen the impact, it would probably put me down or at the very least stop me in my tracks. running would be useless since manny is incredibly quick on his feet.”

“I’m Frankenstein. I stand 6 foot 7 inches tall. Pacquiao is a fighter, I’m a monster. I’ll go toe-to-toe with him,when he throws his left straight, I’ll hold his hand with my giant right hand. Hug him so tight, open my bloody, stinky mouth and let out my mouth’s breath to his face until he can no longer breathe. While hugging and squeezing him until he falls unconscious.

When he’s already unconscious, damn, I had knocked him out without single punch, I’ll carry him to the hotel and bring 7 beautiful naked girls. I’ll wake Pacquiao up, he’ll be surrounded by ladies wearing only bras and panties.

Then I’ll close the door. I won’t tell you what’s going to happen next…”

Every week The BTBC will bring you the best in outlandish, hyperbole-filled posts made by Manny Pacquiao’s goofiest nut-huggers.