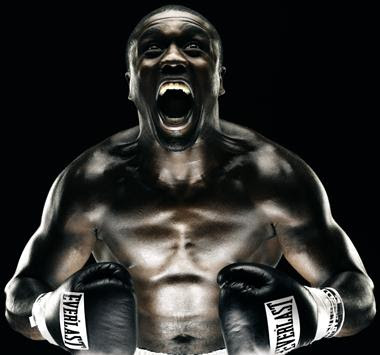 The unanimous decision victory played out similarily throughout all 12 rounds:

Urango would bull forward, head down, Berto would attempt to catch him with fast uppers and hooks and the end result would almost invariable lead to a clinch, a half-clinch or an entanglement of bodies.

Despite the lack of aesthetic appeal to the bout, Berto controlled the contest from the very beginning and cruised to victory with scores of 117-111 and 118-110 (twice). The BTBC had it scored 118-110.

In the opening bout of the HBO Boxing After Dark telecast, Kermit Cintron (31-2-1, 27 KOs) shocked most experts and fans by beating highly-regarded Mexican prospect, Alfredo Angulo, via UD in a WBC Jr. Middleweight Title Eliminator.

Cintron began the bout by using plenty of lateral movement and utilizing his reach advantage by throwing nothing but jabs and straight punches.

In the first four rounds, Angulo seemed almost paralyzed and unable to catch Cintron with anything of note. By the second half of the fight, however, Angulo began to come on and win some rounds with his relentless pursuit.

Angulo’s best moments came in the last three rounds when Cintron seemed to be flat-out running and looking to tie up whenever possible.

However, the late surge wasn’t enough and Angulo lost on all three cards by a score of 116-112.

Cintron will now face champion Sergio Martinez in a bout that will be a rematch of their controversial draw last February.