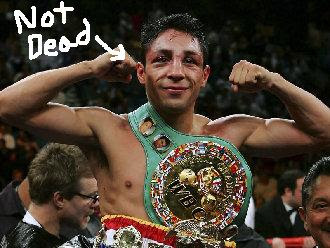 After a 14-month lay-off and three surgeries to repair a detached retina (one of three detached retinas in his last year in the sport), Israel Vazquez has been given medical clearance to start training and was granted a new boxing license from the California State Athletic Commission.

In his first post-comeback move, Vazquez announced that he would now be competing as a Featherweight, a division above his previous weight class. He also voluntarily relinquished his 122 lb. Ring Magazine Championship.

Vazquez’s plans include a tune-up bout, possibly in Mexico, and either a run at Takahiro Aoh’s WBC Featherweight title (promised to him by WBC President, Jose Sulaiman, when Sulaiman reluctantly stripped Vazquez of the WBC Jr. Featherweight crown) or a Part 4 in the brutal series versus Rafael Marquez.

Another possibility is a bout with Puerto Rican power puncher, Juan Manuel Lopez. However, Vazquez says that a Lopez vs. Vazquez bout would have to take place at 126, not at Lopez’s current weight of 122 lbs.