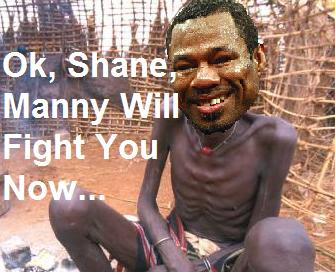 Shane Mosley, desperate for a payday, has been calling out current Pound-for-Pound kingpin, Manny Pacquiao, and has been more than willing to concede every possible advantage to the Filipino star.

As it stands now, Mosley, a former 154 lb. champ will have to fight at a catchweight of 142 or 143 lbs. if he wants Pacquiao to even consider the bout. Mosley would also likely concede a 60-40 money split in Pacquiao’s favor.

When contacted about the proposed fight, Manny Pacquiao said: “No problem, we can fight. As long as we negotiate.”

Other possible concessions given by Mosley: