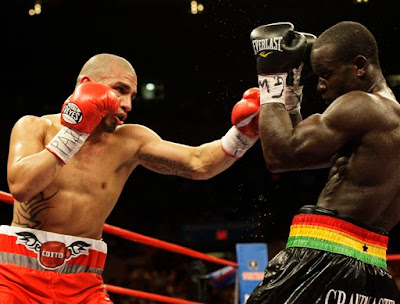 Courtesy of the AP:

Miguel Cotto gave thousands of his fans exactly what they hoped for on the eve of the Puerto Rican Day parade.
Overcoming a cut from an accidental head butt in the third round and several brutal rounds with Joshua Clottey, Cotto fought to a narrow split decision Saturday night in a packed Madison Square Garden, retaining his World Boxing Organization welterweight title. With blood pouring down his face, Cotto, the pride of Caguas and the roughly 800,000 New Yorkers who trace their roots to Puerto Rico, threw his arms up at the end of a close bout that left the two battered.