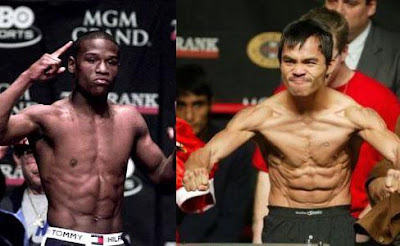 Sometimes, in Boxing, the best stories are the ones between the lines.

Following the announcement that Mayweather-Marquez was off, The BTBC couldn’t help putting the clues together that would lead to the theory that Mayweather is planning on going right into a Manny Pacquiao fight without the benefit of a tune up.

Mayweather’s rib injury came right after Bob Arum just surprisingly announced that he would be willing to make a 50/50 split on a Pacquiao/Mayweather bout…Also, with Cotto suffering a deep gash over his eye, an October Cotto/Pacquiao bout is not realistic and, by all accounts, Manny is not at all interested in fighting Shane Mosley.

That would leave Mayweather as the only major money bout available to the Pacquiao camp.

On Mayweather’s side, early indications had to point to the fact that his bout with Marquez would not be selling as well as previously thought and, with the help of the Golden Boy brain trust, a change in plans had to be made in order to save an embarrassing spanking at the box office and among PPV buyers.

Don’t be surprised if Mayweather-Marquez is called off soon and Mayweather-Pacquiao is announced…Also, if that happens, expect Juan Manuel Marquez to be tossed the consolation prize of a bout with Edwin Valero and a promise to fight the winner of Floyd vs. Manny.