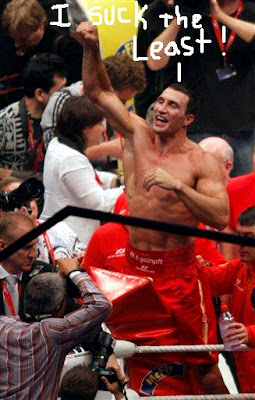 Surely, a battle between a #1 fighter and a #3 contender, at worst, would be a thrilling match-up with many ups and downs and shifts in momentum. I mean, look at recent match-ups between top 3 guys: Cotto vs. Clottey, Adamek vs. Cunningham, Timothy Bradley vs. Kendall Holt, etc…

But, in the Heavyweight division of 2009, quality control is not a legit concept…Hell, to be honest, there is no quality to control.

Chagaev came into this fight with either no game plan or no desire to adapt to the “impossible” task of dealing with Klitschko’s long arm measuring him the entire fight. So, presented with the daunting task of a straight left arm in front of him, “White Tyson” Chagaev, went to his plan B: stay on the outside and absorb every punch that Klitschko would throw.

Wlad knocked Chagaev down in the second, essentially eliminating any pretense the WBA Chump in Recess had of even trying to get inside of Klitschko’s jab.

The rest of the fight was smooth sailing for the reigning WBO, IBF and Ring Champion as he pawed with his left and swatted with his right with no fear of retribution as Chagaev was always at an arm’s length.

In the 8th, Klitschko opened a cut over the Hepatitis B-infected Chagaev’s left eye that was bleeding profusely and surely making fans at ringside cringe.

Referee Eddie Cotton called an end to the farce before the start of the 10th round.

61,000 German fans went crazy at an outdoor soccer stadium while millions of boxing fans around the globe shook their heads in disgust.

This leaves the Heavyweight division with a clear Top 2, but a Top 2 who will never fight each other (Wladimir and Vitali Klitschko). The rest of the Heavyweight division looks like rejects from a Star Wars convention: A painfully passive Wookie (Nikolay Valuev), A Mexican Jabba the Hut (Chris Arreola) and the rest of the rejects from the Star Wars cantina scene (Eddie Chambers, Alex Povetkin, John Ruiz, etc). Unfortunately for us fans, this convention has no Luke Skywalkers, Han Solos or even a Darth Vader…

David Haye is on the outside looking in, facing a possible shot at Vitali Klitschko (Vitali, earlier, won his arbitration case against the WBC and can now choose his next opponent instead of being forced to face another Heavyweight retread, Oleg Maskaev). Haye, at the very least, brings some flash and excitement to the dreary division.

Barring an almost impossible win by David Haye, we are going to be stuck in the muck of the heavyweight division; trapped in the Klitschko Bros. vortex of Jab, Jab, Jab and of opponents who simply don’t have the skill or the will to find a path to victory.